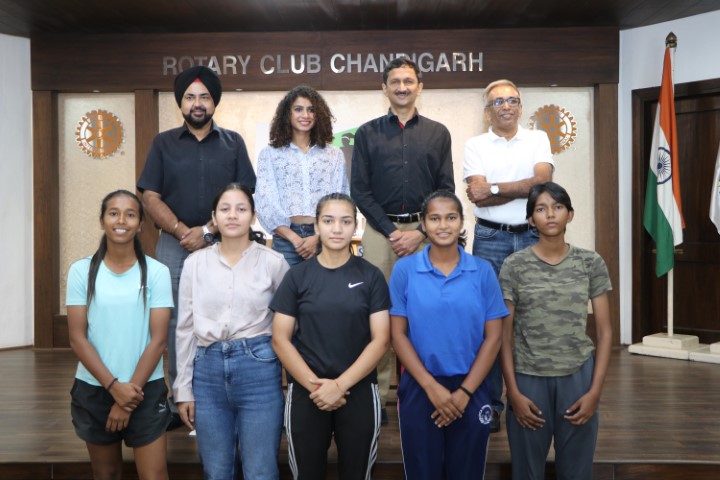 Chitranjan Agarwal, and Vivek Atray, Co-Founders of PlayWrite Foundation while lauding Harmilan for her recent achievement said Harmilan by setting a new record has made us all proud and will sure go a long way with success coming her way in more athletic championships.

Some girl athletes of Chandigarh were also present there to interact with Harmilan Kaur. A Q&A session was organised on the occasion by Playwrite.

Harmilan grew as an athlete at school and then at Punjabi University. In 2019, she broke the university’s 1500m record clocking 4:16.68. Her mother comes from Uttar Pradesh and father is from Punjab. Mother Madhuri Saxena, is a 800m silver medallist at the 2002 Asian Games, and father Amandeep Bains, 1500m medallist at the South Asian Games.

Giving details about her career, she said “My first-ever race was a zonal meet when I was in Class 3. I was a class topper in academics but finished second in the race. I wanted to quit sports because of the second-place finish. In the next race I won, my photo was published in the paper. From then onwards it has been only sport for me.”

Bains now wants to go one step forward and is targeting a podium finish at the 2022 Asian Games. “I’ve set a new national record but I think I can push myself even further. I am sure with extensive practise and training I will be able to bring a medal in Paris 2024. Speaking on fitness levels, she said what is important is zero fat, which my coach has been focussing all through. On the future of Indian athletics, she said adequate number of tracks are not there, for example in Punjab every district needs to have three tracks.”