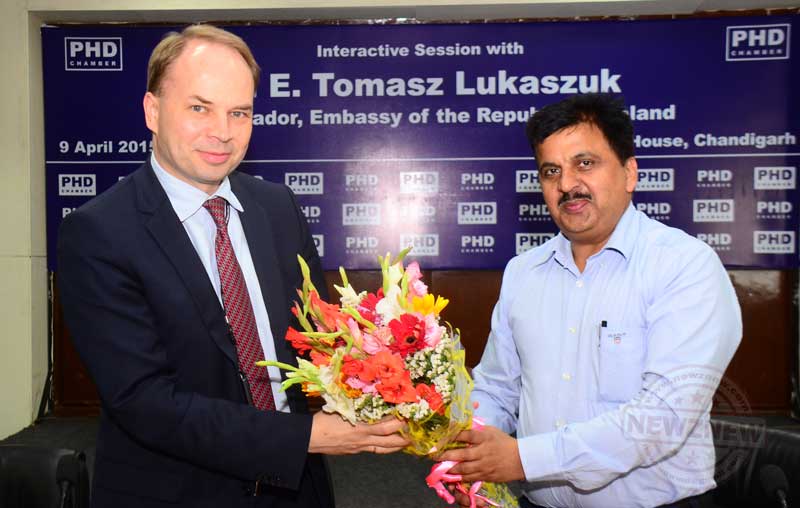 The Ambassador visited PHD Chamber of Commerce and Industry here today as part of the continuing efforts to increase bilateral trade and investments between Poland and India.

India is perceived in Poland as one of the most important non-European economic partners, said the ambassador. It is an attractive gateway to the EU and CIS markets. Poland, said Lukaszuk, is already India’s largest trading partner in Central Europe, with trade between India and Poland witnessing an encouraging trend in recent years.

Indicating that the future prospects for trade and investment between our countries are significant, Dalip Sharma, Director, PHD Chamber said that the inbuilt complimentary of the economies of both Poland and India offers innumerable opportunities and it is important that we build on the existing strong relations. We need to accelerate our efforts for the growth of bilateral economic cooperation, particularly in view of the current economic scenario. There is a need for greater synergy of efforts between the business communities of Poland and India, specially Punjab and Haryana to accelerate the two way cooperation.

The fact, said Sharma, “that both India and Poland are coal-based economies and hugely dependent on the import of energy resources, gives them common ground for strengthening cooperation in fields such as energy efficiency, renewable energy, green technologies and alternative sources of energy”.

Poland is keen to have a strong business relationship with India and will explore the possibility of foreign direct investment in agriculture, power and mining in multiple Indian states, Lukaszuk added.

Lukaszuk said it is keen on expanding and deepening economic ties with India and wants to be part of Make in India’ mission that focuses on expanding manufacturing base in Asia’s third largest economy.

“Trade volume between India and Poland has been growing steadily and it now stands at US$ 2 billion. We want it to reach up to US$ 20 billion in the next few years,” said Ambassador of Poland in India Tomasz Lukaszuk here.

Start-up Founder wants Slum Children to get a feel of Start-up...