Q1) My daughter is 16 years old. She started having her periods at the age of 13 years but they are irregular since last 2 years and she has suddenly gained a lot of weight also. My doctor has diagnosed her with PCOS. What is it?

A : Polycystic ovarian syndrome (PCOS) is a common endocrine and reproductive system disorder among women of reproductive age. 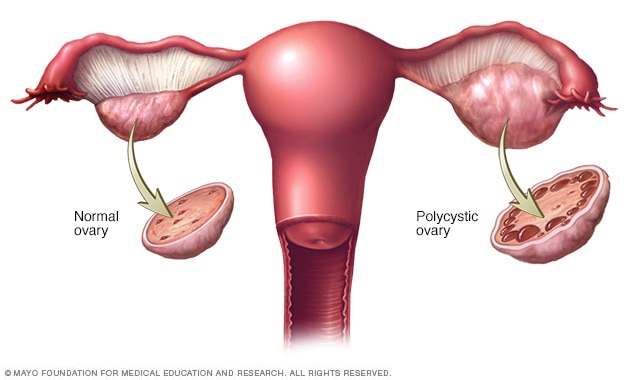 Q2) I was diagnosed with PCOS in November 2016 and am on oral contraceptive pills and metformin. How can pills and insulin-sensitizing drugs help treat women with PCOS?

A : Patients with PCOS have insulin resistance leading to increased androgenic (male) hormone production which increases the symptoms of PCOS. Reducing insulin resistance through the use of insulin-sensitizing medications helps in restoring ovulatory function in many women with PCOS. Similarly, pills also regulate the menstrual cycle and reduce hirsutism and acne by decreasing androgen levels.

Q3)What are the other symptoms of PCOS?

A : Apart from having irregular periods and inability to conceive there are numerous other symptoms like  acne, excess hair growth on the face, chest, stomach, back, arms and legs, male pattern baldness, weight gain, diabetes and velvety, light brown-to-black markings on the skin around the neck and under the arms.  PCOS can also pose an increased risk of  hypertension, abnormal lipid profile, obesity and depression.

Q4) My wife has PCOS and we are trying for a baby since last 2 years. How does PCOS affect fertility?

A : Many women with PCOS have difficulty in conceiving due to irregular or absent ovulation. But with treatment, most women with PCOS will go on to have healthy pregnancies.

Q5)I am 35 years old and 5 months pregnant.I have PCOS and conceived after taking treatment from my gynaecologist? Does PCOS affect pregnancy?

A : Women with PCOS have higher rates of miscarriage, gestational diabetes, preeclampsia and premature delivery.