PSEB has finally announced the 12th Class Compartment Results 2017 on its official website today at pseb.org. The students who did not clear the annual class 12th Punjab board exams gave the compartment papers in the month of June and the percentage of students this year reappearing for the exams was 35%. The results for the 12 class PSEB board exams 2017 was announced on May. PSEB has been witnessing drastic dip of percentages for last couple of years and this year was the most disappointing as the overall percentage of the students this year was 62.36%. 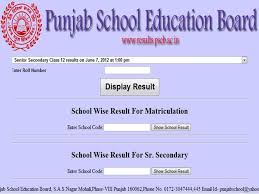 This year almost 35% students reappeared for the class 12th Punjab board exams to clear their compartments. The students can check their 12 class board compartment results in the following way:

Sometime, results take time to load, so stay patient or go to the following site indiaresults.com.

Like every year girls this year as well outdid boys by performing really well in class 12th Punjab board exams by securing an overall percentage of 72.59%. Boys were lagging behind in a big way with only 54.42% passing percentage. The Punjab Education board in an effort to help students clear their exams awarded 27 extra grace marks and landed in trouble last year.

From South Hall , Channa Gill to promote football in All...