NewZNew (Chandigarh) : The premiere of much awaited Harbhajan Mann starrer Punjabi Movie ‘Gadaar – The Traitor’, which is also Punjabi cinema’s first suspense Emotional thriller was held at Chandigarh. The venue of the Premiere PVR Cinemas in Elante Mall, had been decorated to match any Bollywood function with red carpets, flower arrangements, buntings and props. Arrival of the lead actor Harbhajan Mann who has been cast in a completely different look, brought about an air of excitement among fans, who had gathered outside the venue to glimpse their favourite star. 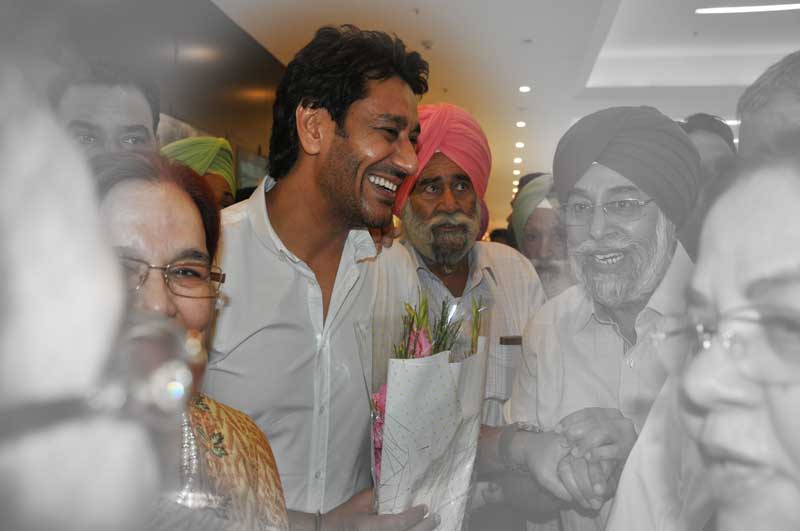 Harbhajan Mann said at the event, “It is a great moment for me and the remainder cast, the producers and director of this very unique offering in Punjabi Film Industry, to be here this evening at the Premiere of ‘Gadaar The Traitor’. The story is thrilling, the film boasts of very good production values and Cinematography is a very high standard. I am hopeful of its success.” According to Mr. Sumeet Singh, MD, Unisys Infosolutions, the company which has produced the movie along-with Grandson Films, “We have tied up shows of the film across India. Not just Punjab but we are also having shows of the film Delhi, Haryana, Maharashtra, Rajasthan, UP among other regions. The International territories that will show the movie are Australia, New Zealand, Malaysia, Canada, Italy, Germany , Spain, USA, Denmark, Philipines, UK among others. We have added new countries in the International Territory and this makes ‘Gadaar The Traitor’ the biggest Punjabi film to be released worldwide. The movie is being shown on 500 screens in territories of India and Abroad.”

Present at the event were the who’s who of the Punjabi Film & Entertainment Industry. The cast, producers and distributors of the film looked satisfied as their hard-work had borne fruit. The film highlights Punjab’s problems in a very appreciable manner. The movie has 3 songs which are very hummable and it has been shot at picturesque locales of Punjab, Mumbai, Goa and Toronto.

Mr. Sunil Kapoor, MD, Grandsons Films said, “The film is a work of slick cinematography & special effects that certainly have never been seen in Punjabi Cinema. The movie will certainly raise the bar in the Punjabi Film Industry.” The film has introduced Miss Australia Punjaban Pageant winner Ms Manpneet Grewal. Harbhajan Mann, a Pioneer in Punjabi Music & Film Industry has been presented as a business tycoon, who loves to live life on the edge. With Bollywood heartthrob Evelyn Sharma doing the title song with Harbhajan, the film is slated to create quite a buzz.

MTV gets ready to turn on the chemistry in relationships with...