NewZNew (New Delhi) : From what started as an auxiliary activity which later became passion and finally adopted as a profession, internationally famous premium brand Rahul and Anushka have paved their way also into the Bollywood industry. 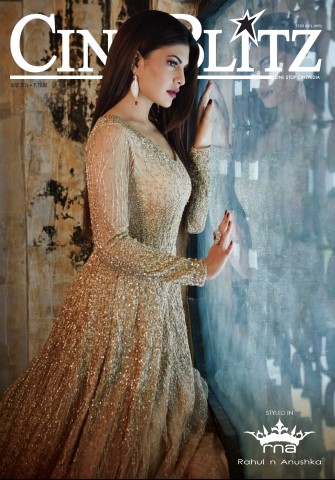 The young fashion designers Rahul Anand and Anushka Laul have recently put their astonishing significance and imagination in the dress designed for the Bollywood actress Jacqueline Fernandez.

Wearing the Indo-western ensemble by designers Rahul and Anushka, Jacqueline looks quite regal in the dress. The gold bralet paired with a printed maxi sleeveless jacket and black pants, the outfit is neatly put together. Her looks were like a surreal Indian princess that also has a knack for modern fashion.

Designer & Owner of label “RAHUL and ANUSHKA”,Anushka Laul,says,”Jacqueline looks absolutely dazzling inRoyal Lotus print jacket and at the same time,elegant and hot in Gold Galaxy gown,which shows that the hard work has been put in right direction.I believe that I and Rahul Anand have done proper justice to our label which is renowned for offering royal luxury women’s wear in bold and beautiful look .Rahul N Anushka is renowned for offering royal luxury womenswear in bold and beautiful look”.

Jacqueline Fernandez will be seen scorching up the temperatures in a hot avatar on the cover page of Cineblitz Magazine .

The Bollywood Diva is paired with Akshay Kumar in Housefull 3 which has reached the gross collection of over 100 crores in India.

Rahul and Anushka has its Flagship stores in delhi and mumbai and sell through 24 multidesigner store in india & also have their international associates in dubai ,kuwait, london  and california

The young designers are also apart of “Make in India” to take premium designs world wide.

They have won many international awards & participated in Lakme fashion week and London Fashion week  and have received great appreciation and have succeeded in becoming a great brand . The label has been designing for Royal families , Head of state, and many bollywood celebrities like Juhi chawla, Shraddha Kapoor , Neha dhupia and shreya Ghosal.