Revolt in AAP Punjab over giving tickets to ‘wrong people’; Arvind Kejriwal in dock: AAP leaders have revolted against the party convener and Delhi Chief Minister Arvind Kejriwal over choosing the wrong people for tickets for the ensuing Punjab Assembly elections. 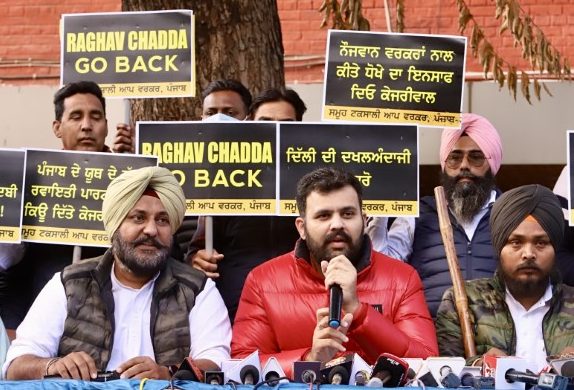 “It is being done at the behest of Delhi Chief Minister and AAP convener Arvind Kejriwal. Tickets are being sold to turncoats for crores of rupees. It exposes the hypocrisy of Kejriwal,” alleged Gurtej Singh Pannu, AAP youth wing president, Mohali district here today while addressing media persons at Chandigarh Press Club.

“We have a list of 56 assembly constituencies where political leaders who joined AAP from parties like Congress and Akali Dal were given tickets in just 1-2 days of their joining at the cost of dedicated party workers who have given their blood and sweat to the party. That money power is ruling the roost in ticket distribution is clear from the example of  Mohali where a realtor  was given the ticket after he switched over to AAP , why were hard working party workers ignored in Mohali and other places?” Said Pannu.

“Arvind Kejriwal and Raghav Chadha are out to ruin AAP in Punjab. Tickets are being given to people having no commitment to the party’s ideology. Those who uphold the principle of the party are being denied tickets. Anyone can buy the AAP ticket in Punjab if he or she has the paying capacity. Dedicated party workers are being taken for a ride.” Said Sheera Bhanboura.

“Does a corrupt person get freedom from corruption if he joins the AAP? If so, then Kejriwal should also field Bikram Singh Majithia on the AAP ticket, as Kejriwal has already apologised to him.” Pannu said further.

“Even in the last Assembly elections, the AAP sold tickets. Kejriwal claimed of winning 100 seats but ended up winning less than 25. Parachute workers and leaders from Delhi won’t be of any use in Punjab. Arvind Kejriwal must mend his ways timely. Otherwise he should be ready to face the consequences,” said Morha Singh Anjaan.

The AAP youth leaders said that they will not let Punjab slip into the wrong hands under any circumstances. “They had some hope from the AAP but Kejriwal and his aides are ruining everything. We need to make our youth aware of their role in saving Punjab from the corrupt people. Though the real strength of AAP as a party were its young loyal leaders, but AAp’s central leadership has no respect for their work and dedication,” said Pannu.

The leaders said that in the coming days they will intensify their agitation against Kejriwal and the Delhi unit of AAP.

The AAP leaders also presented a list of 13 candidates who have been given tickets by ignoring deserving ticket aspirants in the constituencies. The leaders said that most of these people had joined AAP from other parties only recently and are industrialists and not common people. The leaders have asked Kejriwal and Raghav Chadha to explain on what basis these people have been given tickets?

KEAM Third Allotment 2017 list to be released today at cee.kerala.gov.in

Jet Airways celebrates 25 years of the Joy of Living