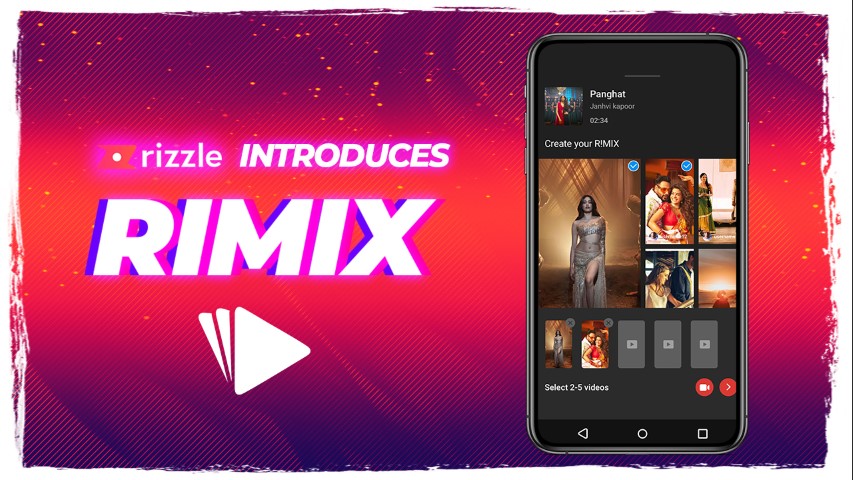 Creators can choose existing videos from the Rizzle app or record their own new videos, add a soundtrack of their choice and share their masterpiece with the world.

Rimix is the industry’s a first-of-its-kind feature that empowers users to create personalised short videos that are unique to them.

One need not have prior knowledge of advanced video editing tools to use Rimix- this is because AI & ML make it easy for any user to pick and stitch their videos, weave in the music of their choice and create their personalised movies.

While other short video platforms in the industry are reinventing the ‘Duet’ feature launched around 4 years ago, Rizzle’s patent-pending feature Rimix is a complete revolution.

Rizzle’s music library has 35,000+ tracks owing to their partnerships with Sony Music Entertainment and Aditya Music. This combined with Rimix can bring about a wave of change in the User Generated Content(UGC) space leading to billions of exciting Rimix videos.

Sapna Patel, Marketing Head at Rizzle adds, “At Rizzle, we constantly strive to empower all our users to become creators of content. And with Rimix, we are a step closer to our goal. Rimix allows all our users- with no to minimum to advanced video editing skills, to create videos and share their stories.”

Rimix received an overwhelming response from creators who tried it in the Beta version of the app. Here’s what the creators who used Rizzle’s Rimix have to say about it:

Actress and model Simran Behl states, “Rimix cuts down the video editing and creating time manifold! It’s simple, fast, and easy to use- and makes compelling videos in a short span of time.”

Choreographer Rahul Suryawanshi adds, “I tried Rimix on Rizzle’s Beta version and I swear by it- making dance mashup videos can now be done in just a few seconds!”

Dance instructor & fashion blogger Shanu Dagor mentions, “Rizzle’s Rimix is making it easier to make mashups of songs, that too along with the videos! My followers love the new mashups!”

With the huge success of the feature on Beta launch, Rizzle is excited to see how users adopt this feature and use it. Rizzle is India’s leading short videos platform that has made a remarkable stride in the vertical short videos and web-series market with its unique features and engaging user interface. Rizzle aims to usher short video entertainment into the next era by providing an entire ecosystem of support and resources for creators to build content on a single platform.