Rotarians are more humane who care for others: Himachal Guv : God cannot be found in temples but within the heart of every human being and therefore true worship of God is by serving humans, said Acharya Dev Vrat, Governor of Himachal Pradesh at the inauguration of the Rotary District 3080 Conference at the Indradhanush auditorium at Panchkula. 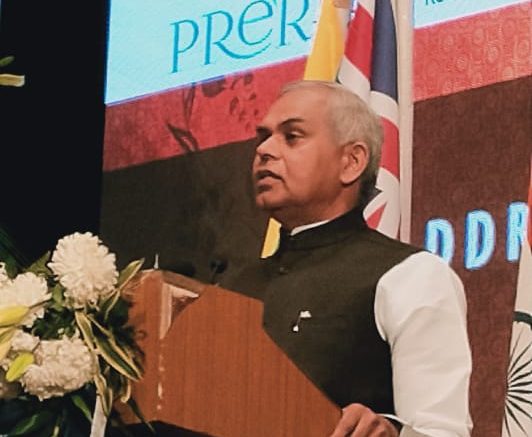 He commended Rotarians for selflessly engaging themselves in the service of other human beings without even knowing them and this is the true way to serve the Almighty.

The true value of a human being is to own up the troubles and problems of others, as he quoted extensively from Vedas addressing the Rotarians.

The two-days conference opened here today with the address of the official Representative of the Rotary International President, Mr Haresh Ramchandani from Jamaica, who called upon the Rotarians to think big which can have much larger impact on the community.

Former world president of Rotary International Ian Riseley congratulated the Rotarians on 114th birth anniversary of Rotary which was founded in 1905 on 23rd of February, and asked to uphold the basic core values of service, fellowship, diversity, integrity and leadership.

On this occasion Rotary Club of Chandigarh’s Saksham project was launched under which 10 students from economically weaker section, who had topped in their 10th examination last year were presented laptops each to empower them to further excel in their studies.

Former world president of Rotary International Rajendra K. Saboo, who had conceived the project of medical mission 20 years back, felicitated various doctors who had been a part of this regular programme that has impacted over 80,000 children in Africa.

Rajendra K. Saboo is leading another mission of 19 doctors and 17 volunteers to serve in Madagascar which leaves on 26th February.

Youth in Rotary session was anchored by RJ Meenakshi.