Royal Enfield Community Celebrates Women’s Day in Chandigarh: Royal Enfield motorcycles are known for its distinctive appearance – the classic styling, bare design, inimitable ‘thump’ of the engine and most importantly, for the camaraderie and the fierce uniqueness of its riding enthusiasts. 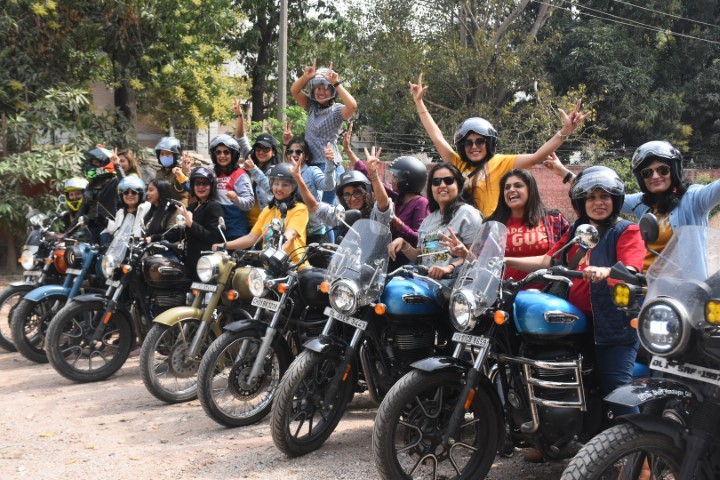 Royal Enfield always believes in supporting & motivating people with a passion for motorcycles & motorcycling, irrespective of their gender. On this women’s day, to celebrate the power of womanhood and their passion for riding motorcycles, women riders from Tricity – Chandigarh, Panchkula and Mohali – joined the ride organized by Royal Enfield.  Around 29 women riders participated in the 15km ride flagged off from Royal Enfield’s showroom at Zirakpur and ended at Social Café, Chandigarh.

During the ride, complete social distancing norms were followed and proper safety measures were ensured. All the participants were also felicitated by Royal Enfield to motivate them to keep following their passion for riding.

The oldest motorcycle brand in continuous production, Royal Enfield made its first motorcycle in 1901. A division of Eicher Motors Limited, Royal Enfield has created the mid-sized motorcycle segment in India with its unique and distinctive modern classic bikes. With its new manufacturing base in Chennai, India, Royal Enfield is able to grow its production rapidly against a surge in demand for its motorcycles. With more than 40% growth every year for the last 5 years, Royal Enfield is fast becoming a very important player in the global mid-size motorcycle market and is working towards re-inventing this space with motorcycles that are evocative and engaging and great fun to ride.

Royal Enfield’s motorcycle lineup includes the newly launched Meteor 350-easy cruiser, the Interceptor 650 and the Continental GT 650, powered by a modern 648cc twin-cylinder engine. Royal Enfield also manufactures the Classic, Bullet, and Thunderbird models in 350cc displacement and the purpose-built Himalayan powered by the new LS410 engine. Royal Enfield operates through 18 company-operated stores and 940 large format stores and 500 studio stores in all major cities and towns in India, and exports to over 50 countries across the world including the USA, UK, several European and Latin American countries, as well as the Middle East and South-East Asia.

Royal Enfield also organizes and supports many motorcycling events and rides globally, more prominently the Rider Mania – an annual gathering of Royal Enfield riders from all over the world to the lovely beaches of Goa, and the Himalayan Odyssey, the most arduous motorcycle ride over some of the toughest roads and highest mountain passes in the Himalayas. Royal Enfield also conducts the popular ‘One Ride’ where people around the world ride out on their motorcycles on the first Sunday of April.