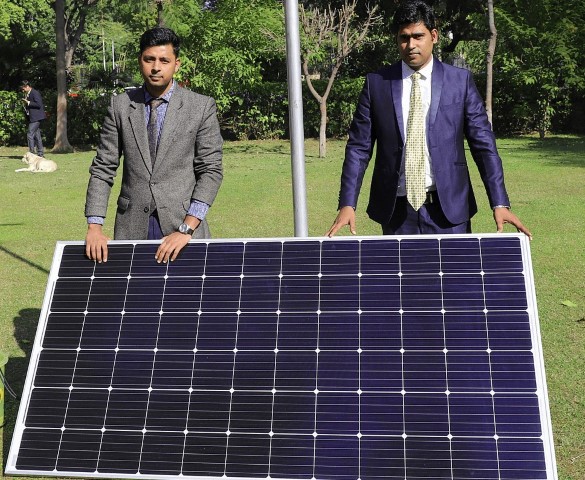 Sh. Nitin Gadkari Ji, Hon’ble Minister for Road Transport & Highways and Minister of Micro, Small and Medium Enterprises, Government of India along with Ms. Ritu Marya, Editor in Chief – Franchise India & Entrepreneur Media  who hosted the event & other dignitaries were present during the online ceremony.

During the occasion, Sh. Nitin Gadkari Ji, Hon’ble Minister for Road Transport & Highways and Minister of Micro, Small and Medium Enterprises, Government of India said, “ Entrepreneurship is very important, my special best wishes to energy business of the year, Loom Solar Pvt. Ltd. & all the winners. I expect them to make a good contribution for the development of this country & the economy.”

Loom Solar has been on the forefront of working on the agenda of harnessing solar energy while confirming to ‘Make in India’ mission. It’s efforts to promote sustainability with renewable mode of energy has thus far reached to over 10 mn online & offline consumers in the urban and rural India and Loom Solar has over 50,000 households adopting solar based energy that continues to bring tangible value to National Solar Mission.

Also Read :   Sony Pictures Sports Network goes all out for the live coverage of UEFA EURO 2020 and Copa América 2021

Through its strong 2500+ retailers and distributors across India, Loom Solar, has also created direct & indirect employment opportunities for over 5000 individuals.

Speaking on the occasion, Amod Anand, Director, Loom Solar said, “The effort of keeping pace with our mission during the tough year that was not easy for many businesses, has really yielded a much sharper and stronger workforce with Loom Solar that has continued to deliver positively for business. This recognition reflects that Loom Solar is maintaining its pace in the right direction and would like to thank Franchise India for the award.”

Loom Solar has believed in staying ahead of market which has been the prime reason of its quest to bring innovation and many market firsts including high efficient advance technology- IoT based AC modules, mono crystalline panels amongst others. In the year 2020, Loom Solar was also recognised as the fastest growing SMB of the year by Amazon Smbhav.  Also during the 11th Annual 2019 Golden Bridge Business and Innovation Awards, Loom Solar won Gold & Silver awards at the ceremony held at Silicon Valley in United States of America.