(IANS) Security agencies and district authorities began a search operation at the Dera Sacha Sauda headquarters near Haryana’s Sirsa town on Friday amid tight security and curfew in the area. The search was being conducted under the supervision of court commissioner A.K.S. Pawar appointed by the Punjab and Haryana High Courts.

Senior district administration and police officers, along with para-military forces and Haryana Police, were involved in the video graphed operation around the sprawling 700-acre campus.

Duty magistrates have been appointed for various zones of the Dera. Officials from police, revenue, health, education, tourism and other departments have also participated.

All roads leading to the headquarters from Sirsa and nearby places were sealed. Even media was not allowed near the Dera campus.

District officials said that the “mystery” over the “dirty secrets” of the Dera and its now jailed chief, Gurmeet Ram Rahim Singh, who has been sentenced to 20 years of rigorous imprisonment by a CBI special court on two counts of rape of his female disciples, could be revealed in the search operation.

But people opposed to the sect’s activities said that the operation had been delayed and alleged that the Dera management could have hidden or taken out weapons and other incriminating things out of the campus in the past few days since Ram Rahim was convicted on August 25.

Also Read :   Mahindra rolls out 1 millionth vehicle from each of its 3 manufacturing plants 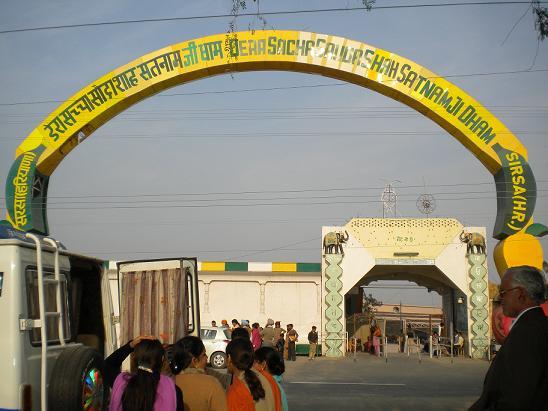 The Dera is spread over two campuses, 600 acres and over 100 acres, about 8 km from Sirsa and 260 km from Chandigarh.

It houses a stadium, a hospital, educational institutions, luxury resort, bungalows and markets.

Hundreds of people and sect followers permanently live and work in the mini-township.

The premises, where the sect chief lived, known as the “gufa” (cave), is itself spread in an area of nearly 100 acres. It is said to have ultra-luxury facilities.

Security was tightened around the Dera headquarters since Wednesday following the approval granted by the Punjab and Haryana High Court to the state government to “search and sanitise” the premises.

Dera administration chairperson Vipassana, who is a close aide of the sect head, said: “We are cooperating with the local administration. All weapons of the Dera and individuals inside (the premises) have been deposited with the authorities. We have nothing to hide.”

In a fresh appeal to sect followers, Vipassana on Friday urged them to cooperate in the search operation.

Hours before the search operation began, the sect’s mouthpiece “Sach Kahoon” on Thursday admitted that human remains were buried inside the premises.

The Dera newspaper, while defending the action of the Dera management in burying the human remains, said this was done as the sect chief encouraged followers to donate the remains to the sect for burial and prevent these from being immersed in rivers, causing pollution.

Punjab comes to the aid of Senior Citizens