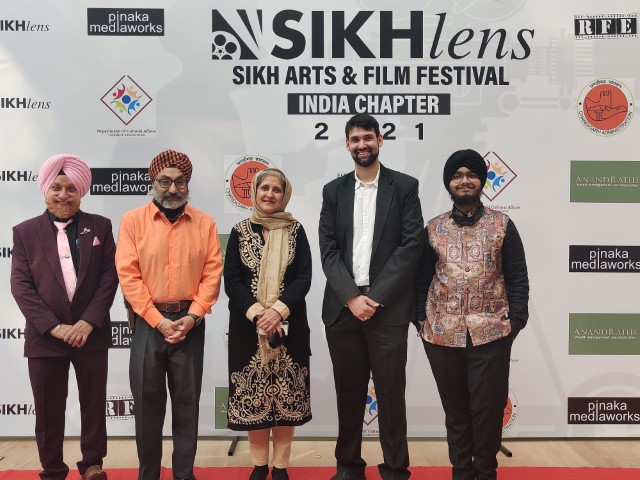 “DUE to worldwide Covid 19, all our festivals have been virtual, and I was very excited that Sikhlens – Sikh Arts and Film Festival 2021 India Chapter  took  place in city beautiful in a physical format, our first in 12 months,” shared Bicky Singh, who founded the festival 13 years back in California, and travelled with it for the first time to India for day long festival.

Singh began organising the festival with an intent to share Sikh heritage and culture with the rest of the world, by creating awareness about the work that focuses on the Sikh community.

“Sikhlens seeks work from people in a variety of fields — films, books, music and art and gives a platform to the artists to share this work with the world, get exposure and create awareness about Sikhs,” says Singh,

This year, at the festival  held on Sunday at Tagore Theatre,  entry was  free  and people thronged in large number to watch  24 films from eight countries that were screened during daylong festival.

Also Read :   Gmail And YouTube Not Working For Users Across India

Chandigarh-based filmmaker Ojaswwee Sharma of Rolling Frames Entertainment, has been leading the India chapter of the festival and four of his films were also  screened in festival, which was supported by the Chandigarh Administration and Department of Culture Affairs, UT

“Through the festival, we tried to promote art, culture and heritage and give the city’s audience to view some off-beat cinema and large number of art lovers coming to see films  proved our intention,” says Sharma.

Apart from the world premiere of three films — Art Finds Its Way, Kites: Beyond Boundaries, Silver Lining: The Journey of  Rashpal Singh and  many artists who have undertaken commendable work in representing Sikhism or aspects of the faith and values of Sikhi, having achieved extraordinary milestones to inspire the upcoming generations with their work were  commended too.

The festival this year also included a book launch and poetry session to spread the message of inclusivity, diversity and togetherness. ‘Sikhs Serving Humanity’, by Sikhlens focuses on how Sikhs internationally have been spreading the Guru ka langar for all and serving local communities by the hundreds of thousands.

Also Read :   Myntra announces the arrival ‘Myntra for Her’

Eleven  Sikh organisations from all over the world, who are trying to do their part to help alleviate the global issue of hunger caused by the pandemic  shared their stories.

Main Attractions included  Traasdi Rooh (Punjabi) by Amandeep Singh, highlights the breathtaking beauty of the landscape and architecture by exploring the abandoned spiritual sites in remote areas of Pakistan; while Salman Alam Khan’s ‘Knitted Beliefs’, is a tapestry of harmony in Narayanpura, a neighbourhood in Karachi, where Hindus, Muslims, Christians, and Sikhs live together in one of the largest multi-ethnic communities in Pakistan; and, Art Finds Its Way by Ojaswee Sharma charts the life of Aman Singh Gulati, now widely known as Almond Singh, a 19-year-old micro-painter who holds the Guinness World Record for making the largest drawing by an individual on almonds.

Most spectators glued to Almond Singh’s work who hails  from a small town in Uttar Pradesh, the protagonist struggled to learn art, as well as obtain support from his family. In a small space, he honed the talent that has gained him World Records. Many of his notable almond pieces portray the essence of Sikhism and also holds the credit for making the biggest puzzle art of Guru Gobind Singh.

For the six-and-a-half years the Sikhlens Digital Voice Program and the Sri Hemkunt Foundation have trained Sikh children in film-making at the gurdwaras of California, and around the world , said Singh.

The World Is Too Small For Walls – Nirankari Baba