MANUU Chancellor Zafar Sareshwala conferred him with the degree at the sixth convocation of the varsity as President Pranab Mukherjee, who was scheduled to be the chief guest, did not attend.

Clad in a graduation gown and sporting sunglasses, Shah Rukh received the honorary doctorate amid a thunderous applause by the students.

In his brief acceptance remarks, he thanked the university for the honour. He said his parents would have been happy to see the moment, especially since he was receiving the honour in the birthplace of his mother.

The actor said his father was well educated with MA LLB degrees, was a freedom fighter and follower of Maulana Abul Kalam Azad.

“I heard my father also contested an election as an independent candidate but forfeited his deposit,” he said. 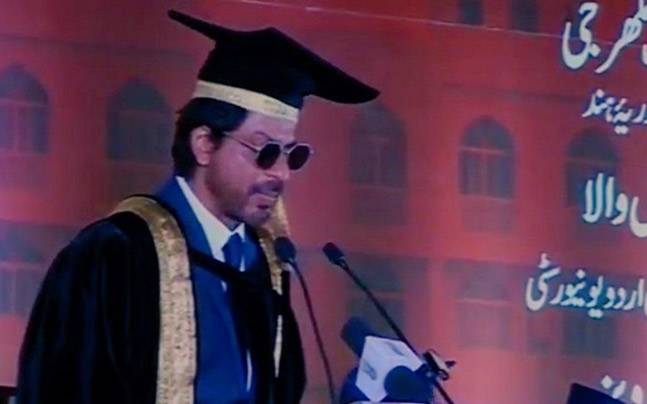 Shah Rukh told the gathering that his father spoke beautiful Urdu and Persian. “Whatever little knowledge I have about how to speak, it is because of him,” he said.

“I think it is a very big responsibility in the field of education and in the field of Urdu and languages. Through my work, whatever little I can do, I promise, I will make sure that I take it to the best of my capabilities,” he added.

The ‘King Khan’ later addressed the students, sharing his thoughts and giving them some advice.

Founder of Rekhta Foundation Sanjiv Saraf was also given honorary doctorate for his contribution to the promotion of A Urdu language.

About 2,885 graduates and post graduates and 276 M. Phil and Ph.D from various disciplines in regular courses were awarded degrees.

According to university officials, 44,235 graduates and post graduates from the distance mode were also be given degrees in absentia.