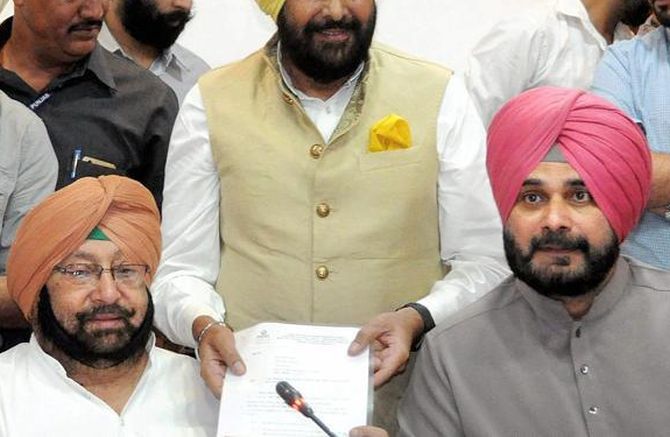 Interacting with reporters after the meeting, he said: “I came here on the call of the party high command and I have presented people’s voices from grass root level to the part…. my stand on democratic power remains the same that the ‘power of the people’ must return to the people.

The committee will continue its consultations on Wednesday.

Meanwhile, sources indicated that there is no talk of replacing the Chief Minister, but only rehabilitation of important leaders. The Congress high command will not take the risk of replacing the Chief Minister as there is nobody of his stature to face the Akali Dal, specially the Badal family. The Congress will have to devise a middle path as 20 MLAs are reported to be unhappy with Amarinder Singh’s style of functioning.

Most of these MLAs complained about arbitrary actions by the CM but the key concern was the government’s inability to bring to book the culprits in the desecration of Guru Granth Sahib and police firing during peaceful protests in 2015, when the Akali Dal-BJP government was in power, as promised in the party’s election manifesto.

Sidhu, who has even dared Amarinder Singh to prove his allegations of joining another party, wants his rehabilitation either in the government or the party. He saying that he is waiting as the high command has intervened.

Sources said the committee will perform a balancing act between the two factions. Sidhu and one non-Sikh leader may be appointed as Deputy Chief Ministers. The committee is expected to submit its report this week itself.