NewZNew (Chandigarh) : The younger of the Sidhu sisters was a born singer and the elder one a song and music lover who ventured into television serials. Recently both beauties from Punjab (since shifted to Mumbai) Dolly Sidhu and the elder one Roop Sidhu have come together to start singing together. Impressed by their performances well known artist career designer Anup Kumar has signed them up for his music company Acme Muzic and today launched them as a classy women’s Sufi band christened “Sufi Sparrows”. 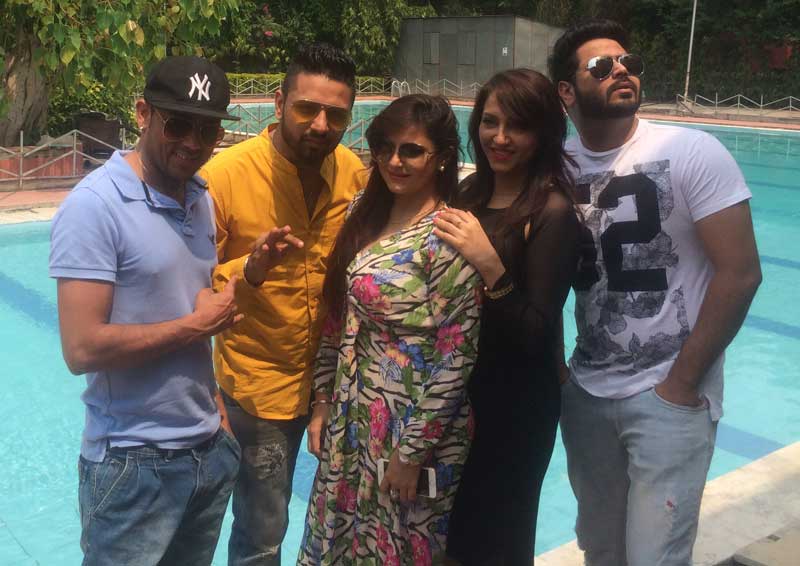 Dolly, who says her life starts and ends with singing, has some smashing hit tracks to her credit like the title track of the movie ‘Jatt Airways’ sung with Master Saleem, starring Tulip Joshi, Alfaaz and Padam Bhola. In the movie ‘Kaafila’ she sang “Lohri Di Raat” with Sukhwinder Singh. Among her other hits are “Berukh Berukh Ho Gei Zindgi, Berukh Ho Geia Pyar Ve” with Kuldeep Raseela in the album ‘Mela’, “Phull Kandya Ch Khildey Ne” with Surjit Khan, “Kajle wale nain” with Davinder Kohinoor and “Tere Te Dil Saada Lutteya Gaya” with Kamal Khan and Mangi Mahal. Being part of the title song in Salman and Katrina starrer “Bodyguard” was quite special for her.

Her elder sister Roop Sidhu, who started her acting career in the Gurdas Mann starrer Punjabi movie “Mini Punjab”, later ventured into television with the serial “Bhasker Bharti” on Sony Entertainment Television. Since then she has found roles in mythology based shows like “Shani Dev” on NDTV and another television series on NDTV called “Armaanon Ka Balidaan – Aarakshan” based on the infamous Mandal Commission violence. More recently Roop Sidhu played the role of Menka Lalit Mansingha in “Dil Ki Nazar Se Khoobsurat”, a romantic drama series on Sony Entertainment Television.

Says Dolly, “I loved music ever since I was born …My parents soon realized the talent in me and they allowed me to perform on stage. Awards came my way and I seriously started singing when I was 11 years old. My first track was “Mela”, the title song of the album by the same name, with Kuldeep Rasila. For that I was nominated for best song in duet category. Here on there was no looking back for me,” Dolly, who holds live shows across the country, gushes.

Her elder sister Roop adds, “I too had a penchant for singing from my childhood days, but drifted towards acting, though I continued to learn

singing from my younger sister. Finally, I decided to join my sister to make my career as a singer. And, because I am an actress too, it will help me enhance my performance.”

Sharing his plans for the “Sufi Sparrows”, Acme Muzic producer Anup Kumar says, Dolly and Roop are a class act. “I would like to promote them as a first of its kind classy women’s Sufi band which will set the stage and reputed clubs and lounges across the country on fire with its scintillating shows.”

All Set to Start your own E-Commerce Website? Here’s how Urbanclap...