In a move to motivate the competitors representing India at the world stage, Shri Dharmendra Pradhan, Minister of Petroleum and Natural Gas & Minister of Skill Development and Entrepreneurship extended his best wishes to the vibrant team from India which will represent the country at the WorldSkills International Abu Dhabi 2017, scheduled from 14th to 19th October 2017. 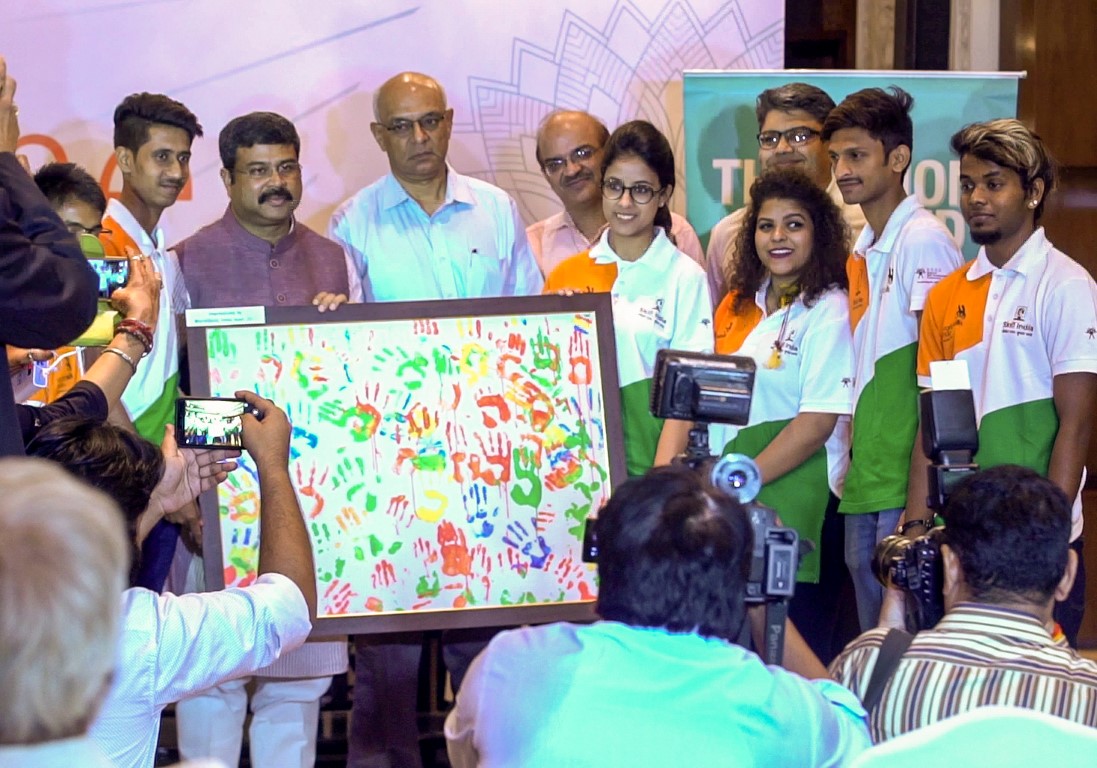 The candidates will be representing India at the distinguished global platform while participating in 26 categories, each having a team of competitor, expert and required interpreter. This year around 1200 competitors from 70+ countries will compete across 50 skills at.

NSDC under the guidance of MSDE, had identified all the competitors through a series of competitions organized at regional and national levels over the past two years. Post which all the candidates have undergone extensive training with Industry partners, which has helped them improve their skills before the competition. Large number of candidates has also travelled overseas to train under the guidance of some of the best trainers and experts available internationally.

At the momentous event, Hon’ble minister also announced, the reward for the winners of the competition on their return.

Wishing the team good luck, Shri Dharmendra Pradhan, Minister of Petroleum and Natural Gas & Minister of Skill Development and Entrepreneurship, said “This is the 6th time that India is participating in WorldSkills and I am confident that this time India will make a mark across all categories. It is our endeavour to make skills aspirational and give the youth of our country the exposure to compete across global and national platforms, where they can prove their mettle. It is a matter of great pride that young talents from different corners of the Country are representing India at the WorldSkills 2017 in Abu Dhabi. These skill champions will compete against the best of their peers from around the world. I wish the team all the best for success in the WorldSkills Abu Dhabi 2017.”

“We need to bring momentum to the Skill India campaign and I would encourage more and more youth to come forward and participate in these opportunities being extended to them.”

Encouraged with the energy of candidates present during the event, Dr. KP Krishnan, Secretary, Ministry of Skill Development and Entrepreneurship said, “I would like to extend my heartiest congratulations to all my young friends who have the honor of representing the country at a global platform of WorldSkills. The fact that skills need to be made and felt aspirational is something that the Hon’ble Prime Minister has emphasized in every speech; and platforms like WorldSkills which is a kind of Olympics of skills will only motivate youth in India to achieve this goal of our country.”

“This competition is going to enrich them with experience and exposure to the best practices and skills in their own field which will help them become a better skilled individual who follows the right processes eventually becoming a good leader. These young champions will become the resource of inspiration for generation to come. I wish the team best wishes and hope for the best results,” he further added.