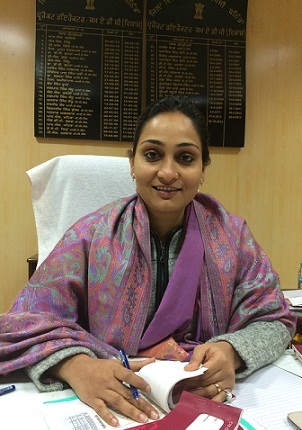 NewZNew (Faridkot) : Sonali Giri IAS of 2009 batch has assumed the charge of ADC at Faridkot on Tuesday. Earlier she had served as ADC (D) of Bathinda. She has been a popular officer due to her practical approach and taking quick decisions on matters.

Sonali Giri belongs to Lucknow in Uttar Pradesh. Her younger sister is also an IAS officer serving in Rajasthan cadre. She is maths graduate from Lucknow University and a merit holder with highest marks in science stream. Sonali has done her MBA finance from Punjab University Chandigarh. She had cleared the civil services exam in 2008 and secured 42nd rank in all India and 8th rank among the women. Initially, she was allocated Gujarat cadre and later on she shifted to Punjab on marriage grounds. Her husband Vipul Ujwal is posted as Commissioner of Moga Municipal Corporation.