Sukhbir should make his stand clear-Tript Bajwa: Punjab Rural Development and Panchayat Minister Tript Rajinder Singh Bajwa has asked Shiromani Akali Dal President Sukhbir Singh Badal to make it clear to the people of the state that ordinances brought in the name of agrarian reforms are pro-farmers or anti-farmers. 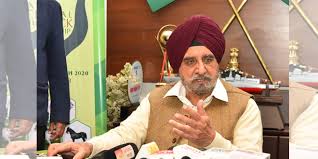 He also asked Sukhbir Badal to make it clear that his party would support or oppose these ordinances during the forthcoming Parliament session.

The Panchayat Minister said that infact it was clear to Mr. Sukhbir Singh Badal from day one that these ordinances were not only anti-farmers, but are also being introduced to rob the rights of the states. But in order to save his wife Harsimrat Kaur Badal’s ministerial berth, he has been blatantly betraying the interests of the farmers and Punjab and has been propagating these ordinances as beneficial for the farmers.

He said that in order to make his lie come true, Sukhbir Badal had even staked his father Parkash Singh Badal’s remaining reputation by making him issue statements in favor of the ordinances. He said that Sukhbir Badal does not have the guts of going beyond personal and family interests and fighting for the interests of Punjab and farmers.

The Panchayat Minister said that the people of Punjab should not be under any illusion as Akali Dal has stood by BJP in abolishing article 370, making Jammu and Kashmir a Union Territory by abolishing the status of a state and supporting  anti-minority laws like the Citizens Amendment Act. Similarly, the Shiromani Akali Dal, would follow the BJP in the case of agriculture ordinances.