With the critical fourth phase of digitization underway in Punjab, Tata Sky, India’s leading content distribution platform providing Pay TV and OTT services, has rolled out its latest ‘One Rupee Change’ campaign. The 360-degree campaign featuring Amitabh Bachchan aims to encourage consumers to make the right switch from analog cable to Tata Sky, with the help of the latest Dhamaka 199 Pack. These unique packs loaded with over 220 channels and services, includes the best of entertainment across genres, priced at Rs. 199/-. 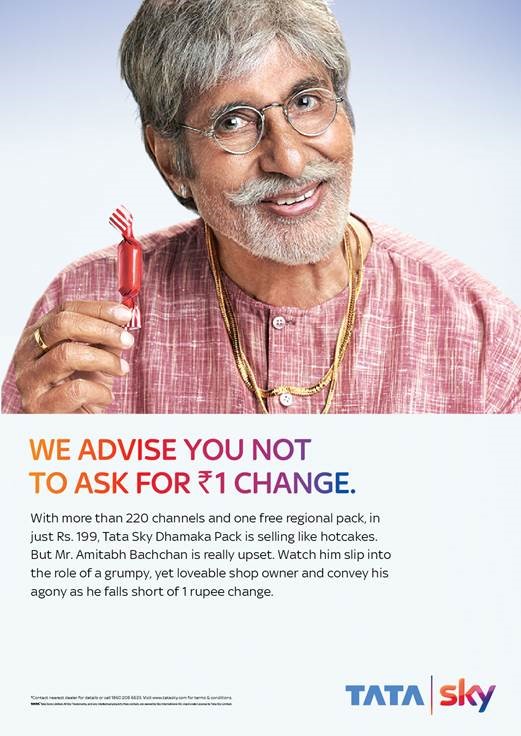 This campaign would be targeting over 2.74 million TV households in 77 sub-districts in Punjab as per the MIB report on DAS IV. In way that is quintessentially Tata Sky, the campaign, directed by national award-winning director Shoojit Sircar, has legend Amitabh Bachchan portraying a grumpy yet loveable shop owner – ‘Uncleji’ whose life has turned upside down because of the success of the Dhamaka 199 pack. The pack, selling like hot cakes, forces him to keep stocking one rupee coins as change to give back to the customer.

Malay Dikshit, Tata Sky’s Chief Communications Officer said, “It’s second nature for us Indians to be exact about the value for what we buy. The simple and humorous communication in this campaign makes use of this peculiar behaviour and lands the price, the pack details and value for money messaging – all in a few seconds. Through this campaign we are looking at targeting 70 mn cable TV households across the country.”

Sukesh Nayak, Ogilvy and Mather‘s Chief Creative Officer, Ogilvy West (India) said, “To sell Tata Sky’s most popular and extremely competitive value pack, priced at just 199, we decided to play on the fun side of the struggle that a shopkeeper has to go through, when he has to return the change for such a popular pack.”

The Family Man Season 3: Here Are The New Updates!!!!

Get Your Hands on Top Headphones and Headsets Brands Exclusively on...