The Umbrella Academy Season 3 – Confirmed News, Episodes Explained And More: The Umbrella Academy, which released its season 2 in 2020 has been a major series that is making the fans wait for so long. It’s already been a year since the show has ended its second season. 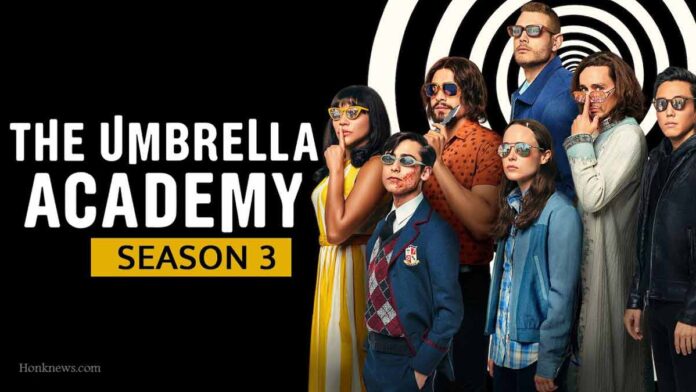 Ending with a cliffhanger, the Umbrella Academy season 3 has been a most awaited season.

In the upcoming season, there is already a lot of suspense enclosed within it. The fans have already started their role and the theories are all over the internet. Recently, there is something regarding season 3 that has been spoiled by the cast. Want to know? Read the whole article and find out for yourself.

In this article, we’ll be going to find everything that has happened and will take place in the events of season 3 of The Umbrella Academy.

The Umbrella Academy – What is it?

The Umbrella Academy is an American Television series that is actually based on the Comic book series. The comic book was written by Gerard Way which shares the same name as the show. After the book was published, Netflix decided to make it into a show. The online streaming platform which is also famous for its own amazing shows has given the direction to Jeremy Slater.

Now, the series started its production and released its first season on 15 February 2019. The show became a hit and people started to love the unique storyline of this series. Within a year, the show got renewed for its second season and released its second season for the audience. With a total of 20 episodes till now, this show is something one should definitely check out.

The Umbrella Academy – What is the Plotline?

The superhero black comedy series, The Umbrella Academy starts its story in the dark night of 1989 when a sudden 43 women gave birth at a time. The situation was quite unique because these women have not been reported to be pregnant but their pregnancy started when their labor pain started. All the babies were born at the same time i.e. 12 am-midnight.

Out of these babies, 7 of them are later adopted by an unknown rich man which is later revealed as Sir Reginald Hargreaves. He adopted these babies and decided to make them superheroes.

But who are these superheroes? And the important question is what is their name? Initially, there were no names to these 7 kids and they are mainly called by the number 1 to 7.

But later their Robotic mother decided to name these kids and we came across our superhero’s real names. Luther, Diego, Allison, Klaus, five, Ben, and Vanya are those superhero children.

Vanya was kept aside from her siblings as she doesn’t own any special superpowers and that breaks her heart sometimes.

Now times pass and all these children have adapted to the different environment. These have their different careers and they become completely engaged with their life.

Starting with Luther who has been living his life on the moon for four years. The next is Allison who is now a famous actor and has been busy with her acting life.

Vaya is a Violinist and is going well with her career. On the other hand, Five has been missing for Sixteen years and nobody really knows about him. Klaus becomes drug-addicted and is currently facing devastating problems within his life.

The Umbrella Academy Season 3 – Is It Officially Confirmed?

All these met after a long time and decided to investigate behind their adopted father. They started to find the evidence and are now suspicious of all the things that have happened to them over the past years. The second season ended on a suspicious note and the audience wanted to know what had actually happened after that.

The official has already confirmed that there will be season 3 of the umbrella Academy in the near future. This announcement was put forward by the Netflix official account this year.

Also, the official Twitter account of the show has updated their profile and cover picture with a new photo which clearly shows that this series will be back with season 3.

The Umbrella Academy Season 3 – When is it Going to be released?

But there is something that is confirmed and that is the first episode. The Twitter account has just teased the fans of the Umbrella academy with a new tweet. The tweet confirmed the new episodes of season 3 and also disclosed their title too.

All these things indicate that the series will be releasing super soon. Also, the official account of the umbrella academy is quite active in recent dates and that means it will be coming super soon.

Note – If there will be any official announcement regarding the season 3 release date then I’ll make sure to update this section for you.

How many Episodes Are there in this show?

Another question that may come to the mind of the readers is what about the episodes of this show. The Umbrella Academy released 2 seasons so far and each season consists of 10 episodes each. Maintaining the same tradition of the 10 episodes, season 3 will also have 10 episodes this year too.

The officials have already discussed the episodes with their respective titles. I have attached the official photo that will help you to understand each episode of this series.

The Umbrella Academy Season 3 – Is there any Official trailer?

The official trailer for season 3 is sadly isn’t officially out yet. So if you are someone who hasn’t watched this series before then there is something you should definitely try. While there are many fan-made trailers of season 3 on the internet, it is still isn’t worth watching than actually waiting for the official trailer.

Till the trailer gets out, watch the official trailer of the first season of the Umbrella Academy

The Umbrella Academy – Is it Worth Watching?

The show may not be that much popular for many people around the world but it is one of the most famous series on Netflix. If you are someone who adores the suspense and superhero theme then you should definitely check this series out.

On the other hand, anyone who loves to watch web series, in general, will definitely fall in love with the amazing storyline of this show. The show will take you to the amazing story of the 6 adopted children who have been traumatized yet are different with their supernatural powers.

What are the Ratings of this show?

The show has been rated with great ratings. Starting with the IMDb rating of the show which is 8/10. The Show is rated with 83% of the rotten tomatoes. Talking about TV.com, which has rated the show with 8.3/10 ratings.

The audience loved the series and appreciated the fantastic look and the whole plot which the show makers have cared for. The fans also said that they highly recommend the series as it is something everyone should check for sure. Talking about the audience rating summary which is 4.8 stars.

The Umbrella Academy has already released 2 seasons with 20 episodes in total. The Netflix Original series which is popular for its amazing cast and supernatural powers is something everyone should check. Till now, the series has been doing amazing and with the end of season 2, there started the need for season 3.

The officials have already confirmed that season 3 is on its way to release. There have been several teasers out which include the episodes and their title. While the audience is waiting for the official release date we recommend you to read more articles regarding your favorite show.

Till any further notice, Read from our official website Honknews and get updated with the latest renewal and cancellation news of the series.