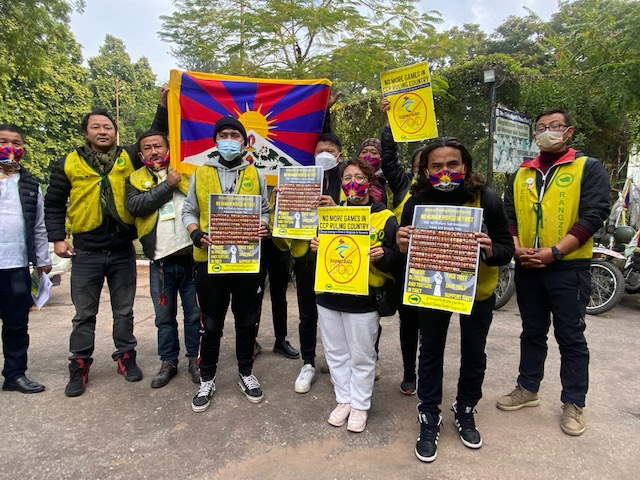 The bikers were formally welcomed by students hailing Tibetan commune in tricity. The Rally is aimed to bring international attention to the gross human rights violations committed by China in Tibet and East Turkestan (Xinjiang) which have been under Chinese occupation.

Bikers were appealing for the basic human conscience of all the people and boycott Beijing Winters Olympic 2022 as an expression of solidarity with people in Tibet, Xinjiang, South Mongolia and Hong Kong who are suffering under Chinese repression and oppression.

“Though sport ideally must be kept away from politics in a normal time, however, the atrocities carry out by China against Tibetan and Uyghur people in the form of increasing police custodial deaths, tortures, forced sterilization, forced disappearance, genocide and running of mass concentration camps raise fundamental questions about the basic tenets of humanity.

We cannot and should not keep sports away from basic moral principles. The international community cannot go on like business as usual with China regarding its repressions at home and aggression abroad from India’s Himalayan borders to Taiwan and South China Sea.” said RTYC Spokesman Kunga Tendon.

We call upon all the relevant international governments, NGOs, companies and sportsperson to boycott Beijing Winter Olympic 2022 in order to make China accountable for its gross violation of human rights. International events like the Olympic Games should be a celebration of human brotherhood, freedom and dignity and should never be sold out as a platform for a totalitarian and imperialist regime to whitewash its crimes against humanity.

Samman Aaj Ki Zarurat – Women of Worth Awards held at...