NewZNew (Chandigarh) : Winter season is the time when people from Chandigarh rush to nearby hill stations in order to enjoy snowfall. The city of Chandigarh already lies in the foothills of Himalayas making it the perfect gate way to hill stations in Himachal Pradesh for people not just in Chandigarh but also from Punjab, Haryana, Rajasthan, Delhi and other parts of North India. Although the state of Himachal Pradesh is full of hilly areas that receive snowfall in winters, but here’s a list of top 7 hill stations near Chandigarh which make up a perfect tourist destination during winters.

If you are from the city beautiful or belong to any other part in North India and are looking to enjoy snowfall at a hill station which is somewhat near to Chandigarh, then this list would help you in a great way. Here we go :- 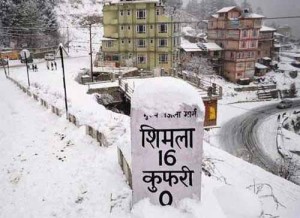 Shimla is the capital city of Himachal Pradesh. Known as the queen of hills, Shimla is located at just 4 hours drive from Chandigarh and thus is the most visited hill station near Chandigarh. Although, it is an evergreen hill station which sees tourist activity throughout the year but the best time to visit Shimla is during the Christmas & New Year time. The city gets 100% hotel occupancy in these days and during entire winter season the hotel occupancy lies between 70 to 85%.

Snowfall in Shimla: As winter season starts in November, Shimla receives its first snowfall in the last week of December. Normally, it snows around the Christmas – New Year time and that’s why people from Chandigarh & Delhi visit Shimla in large numbers to see the snowfall during Christmas vacations.

Kufri is another popular hill station near Shimla. More than 50% of tourists visiting Shimla go to Kufri which is just about 45 minutes drive from Shimla. Kufri can be the best destination is by chance you did not find any snow in Shimla. Being at a higher altitude, chances of seeing snow at Kufri are more as compared to Shimla. We have listed Kufri in the list of top hill stations near Chandigarh as people often travel to Kufri directly from Chandigarh (to see snowfall in cases when the snow in Shimla melts off) and come back to Shimla for night stay.

Travel Route = From Shimla through the Tunnel.

Snowfall in Kufri = If there is mild snowfall in Shimla, then you may expect heavy snow in Kufri at the same time. Also, the snow in Shimla melts soon due to sun but if you plan to go to Kufri, you’ll be able to see wet roads and snow at many places which do not get direct sunlight. 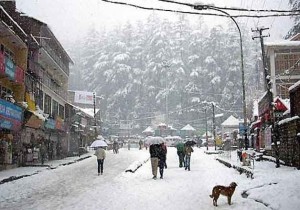 Travel Route: Although many routes can be taken, the shortest one is from Chandigarh – Baddi – Nalagarh – Sundernagar – Mandi – Kullu – Manali. If you wish to travel by air, then there is an airport near Kullu. Check out this news article – Flights to Kullu Manali from Chandigarh Airport.

Snowfall in Manali: As I mentioned above, Manali receives heavy snowfall. Normally it snows in the month of December and whenever you visit Manali during the winter season, you’ll be able to see snow on manali Rohtang road. Though the road is closed, but you can go till Sollang valley to enjoy. Also look out for snow adventure games in Manali during the winter season. 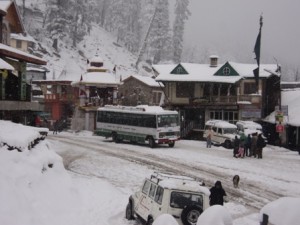 If you want to experience extreme winter and play with knee deep snow, then Narkanda is the place to be. However, it is not as near as the hill station of Shimla from Chandigarh, but a lot of tourists go to Narkanada due to its popularity. Narkanda is located beyond Shimla & Kufri and far off mountain peaks at Narkanda can be seen covered by snow even in summers. If you get late to plan a visit to Himachal Pradesh during peak winter season and snow at Shimla, Kufri has already melted then Narkanda awaits you!

Travel Route: The best route as a tourist would be to go through Shimla and Kufri but there’s another direct short route from Chandigarh.

Snowfall in Narkanda: Along with Manali, Narkanda is always one of the first hill station situated near Chandigarh that receives early snowfall. Mostly, it snows at Narkanda in the start of December and remains there till late February. The thick snowfall and sub zero temperatures make Narkanda a good tourist spot for those coming from the plains of Chandigarh & Delhi areas. 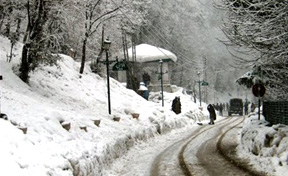 If you have gone to Shimla – Kufri as well as Kullu – Manali side and are kinda bored of going to the same hill stations, then Mussoorie can be a good option. Mussoorie is a hill station in Uttrakhand and its beauty and popularity has made us to include it in our list of top 7 hill stations near Chandigarh. Dehradun & Mussoorie are popular destinations for people from Chandigarh, Punjab, Haryana & Delhi but people mostly plan to go there during theirsummer vacations. Mussoorie is an excellent hill station to see snow in the winter season with an advantage that it lies nearby Chandigarh.

Snowfall in Mussoorie = When in Dehradun, you’ll be able to see the snow clad mountains of Mussoorie. Normally, Mussoorie receives snowfall in the month of January. 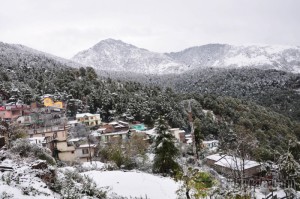 Another new hill station to be explored apart from Shimla & Manali is Dharamshala in Hamachal Pradesh. It also has a cricket stadium. Just 5 Km from Dharamshala lies Mcleod Ganj, a beautiful location which hosts Tibet people and followers of Dalai Lama. Mcleod Ganj is a very popular tourist spot all through the year. In winters, Dharamshala and Mcleod Ganj receive snowfall which is a wonderful treat to the eyes.

Yol is another beautiful hill station situated at just 20 Kilometres from Dharamshala which makes up for a beautiful scenic beauty during winters.

Snowfall at McleodGanj: As soon as you reach Dharamshala, you’ll be able to see snow covered mountain peaks. Chilly winds blow in Dharamshala during winters. Mcleod Ganj most probably receives snowfall during the month of January. The beautiful city makes up pure delight to watch when it snows. While at Dharamshala, you’ll also be able to see the higher peaks of Himalayas that make up India – Tibet and India – China border. 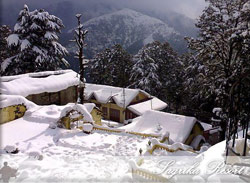 If you are up for a long travel through Punjab and wish to see never seen before beauty of a hill station, then Dalhousie awaits you. It lies in the state of Himachal Pradesh but one has to travel a long way through the plains to reach Dalhousie. The environment and scenic beauty of Dalhousie has has made it rank at Number 7 in our list of Top hills stations near Chandigarh & Delhi.

Snowfall at Dalhousie: Dalhousie receives snowfall in the month of Jan and is thus thronged by tourists mainly from Amritsar, Jalandhar and Pathankot, Gurdaspur areas of Punjab. The snow covered city gives awesome views of the valley but the snow does not stay for a very long time. Although, like any other hill station in Himachal near Chandigarh, Dalhousie is also an evergreen tourist spot.

Cornitos goes extra Chunky with the all new Salsa Dip