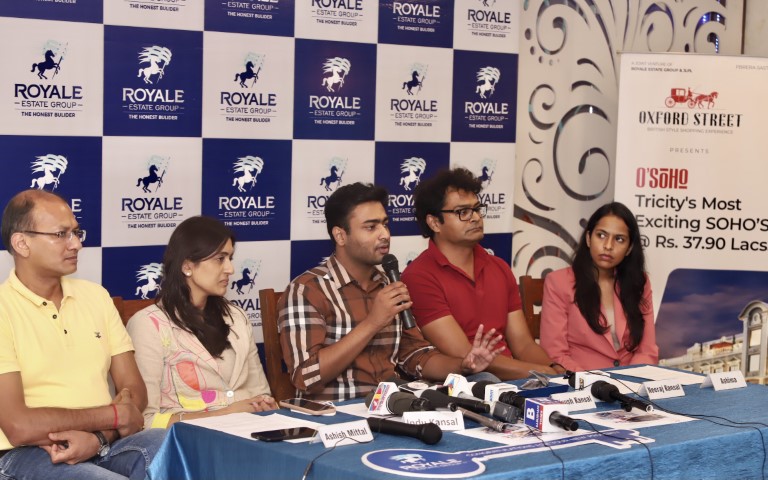 The formal unveiling of ‘Oxford Street’ was done by starting the process of handing over keys to the owners by the directors of Royale Estate Group. The stunning ‘British style’ Oxford Street is spread over 4.5 acres of land.

Addressing the media, Neeraj Kansal, Director of Royale Estate Group said, “This is the first time that the International High Street concept has been brought to the region. The project is meticulously planned, and has the biggest highway front in Zirakpur.

The USP of the real estate project which makes it different from run of the mill projects is the unique leasing model institutionalized by the developers. Calling the project an ideal investment for the prospective investors, Piyush Kansal, who is a young director of Royale Estate Group and directly in charge of “Oxford Street’s” marketing said, “Oxford street has changed the scenario of commercial real estate projects. There is no ROI being given by developers like earlier times we on the other hand are giving investors a lucrative opportunity of ‘lease guarantee’ of a commercial space with good capital appreciation. At ‘Oxford Street’ our  buyers’ need not worry about leasing their units, as our team directly makes a deal between customers and brands.”

Piyush added,”The model we have established safeguards investors ‘ hard earned money & there is no liability of returns on developers.”

Meanwhile more than 60 plus possessions of the property will be given to the owners in a week during the phase 1 of the possession process of ‘Oxford Street’. Though as per RERA agreement the group had committed to give the possession to owners by 2024, the same was being done 3 years in advance. The possessions are being given under the banner of a uniquely named campaign ‘Red Letter Day.’

‘Oxford Street’ is a new retail revolution in the region which has illustrious flagship stores, outlets of culinary bigwigs, new age office spaces,  sohos’, areas earmarked for hypermarkets, banks etc. While nearly 30+ retail national and international brands have already been brought into ‘Oxford Street’, as many as 40+ culinary brands have been signed up.

It is noteworthy that Chandigarh’s Royale Estate Group has also spread its wings to international borders and has established projects in the UK. The group has an enviable track record of delivering projects before time, having all its land registered in its name  and being a 100 per cent debt free company which is a rarity in the corporate world.

Ashish Mittal, Indu Kansal  & Ashima Goyal who too are directors in Royale Estate Group also participated in the press meet.