TS EdCET hall ticket 2017 has been released today by the Osmania University as only four days are left for the entrance test. OU will be conducting the Telangana State Education Common Entrance Test (TS EdCET 2017) on behalf of Telangana State Council of Higher Education and the qualified candidates will be declared eligible for admissions to 2-year regular B.Ed. (Bachelor of Education) course. The applicants can use TS EdCET hall ticket 2017 download link from the official website edcet.tsche.ac.in.The hall tickets have been uploaded today at the official website edcet.tsche.ac.in 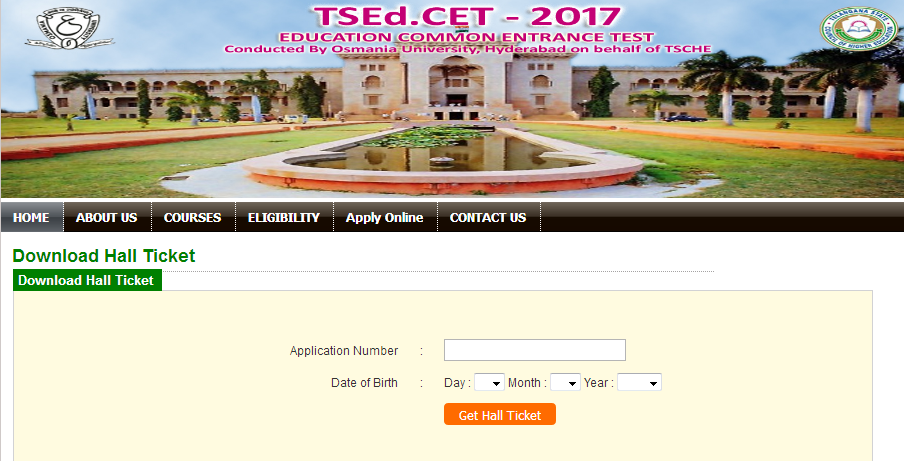 TS EdCET 2017 was notified by the Osmania University on June 11 and the online application process opened the next day. The last date for submitting the applications was set as July 6, while two extra days were also given for submitting the application, but only with late fee. As per the notified schedule, TS EdCET hall ticket was uploaded for all the eligible applicants today. TS Ed.CET 2017 will be conducted on July 16 at multiple test centers in 14 cities.

Ed.CET 2017 will be conducted as an offline test wherein the candidates will have to mark the answers in the OMR sheet. The entrance test will be conducted as a single paper having 150 multiple choice questions. The questions will be divided in three parts, with Part A & B having 25 questions each. Part A will have questions on General English, while Part B will have questions on General Knowledge & Teaching Aptitude. Part C will be subject-wise and will have 100 questions. The candidates will have to attempt any one of the five subjects as per the eligibility, the subjects will be : Mathematics/ Physical Sciences/ Biological Sciences/ Social Studies/ English.

The candidates are advised to download TS EdCET hall ticket 2017 as soon as possible and check all the entries carefully. The test timing (11 am to 1 pm) should be mentioned in the hall ticket along with other details. After the conduct of the entrance test, the key will be released by the University and the results will be announced on July 28. There is no requirement of qualifying marks for SC, ST candidates, but for others, scoring 25% marks (37 out of 150 marks) is mandatory. The qualified candidates will be awarded ranking which will be used by TSCHE for merit-based admissions to B.Ed. course.

The hall ticket of TS EdCET 2017 are available now at the official website edcet.tsche.ac.in.

MICHELIN® RADIAL NZG Tehcnology for the First delivery of The...