Telangana TET or TS TET 2017 has been conducted by the School Education Department on July 23 for which around 3.3 lakh aspirants appeared, out of 3.67 lakh registered candidates. The candidates are seeking the release of official answer keys of the TET exam, which is yet to be released by the authority. For now, TS TET key 2017 has been released by Manabadi, while the official key may get released in a day or two. 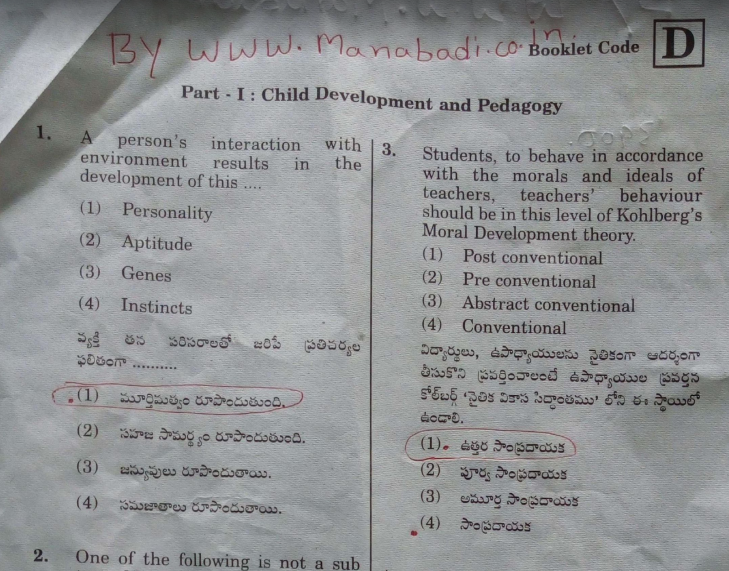 TS TET 2017 was conducted as two papers on Sunday, as per the NCTE guidelines, wherein Paper 1 was for the candidates who intend to be teachers for Classes I to V and Paper 2 was for Classes VI to VIII. For TS TET Paper 1, 88.59% attendance was recorded as 98,905 candidates appeared out of 1,11,647 registered candidates. Meanwhile, 2,30,881 candidates out of 2,56,265 registered candidates took Paper 2, thus taking the attendance to 90.09 percent. TET exam was conducted at 1,574 test centers across the State.

Both the papers in TS TET 2017 comprised of 150 multiple choice questions and the candidates had to mark their answers in the OMR sheet. The exam conducting authority publishes the answer keys of TET exam and while it may take a day or two for the same, Manabadi has released the unofficial versions of TS TET key 2017. The answer key released by Manabadi is only for paper 1, and has been updated for all four sets of question paper- A, B, C & D.

In the TS TET key released by Manabadi, the scanned copy of question paper has been updated with the answers circled with pen. Find the answer keys set wise here: Set A, Set B, Set C and Set D. For Paper 2, SakshiEducation has updated just the question paper now.

School Education Department will announce TS TET results on August 5 and the candidates (general category) scoring 60% & above marks in the test will be declared TET qualified. The qualifying marks for BCs are 50% & above, while for SC/ ST/ Differently-able category, the marks are 40% & above. The qualified candidates will be eligible to participate in the State government’s teacher recruitment processes and while preparing the selection lists, 20 percent weightage will be given to TET scores and 80 percent weightage will be for written test under Teacher Recruitment Process.

“Be Vogue” a Life Style Show at welcomhotel bella vista from...