NewZNew (Chandigarh) : Famous Punjabi Singer-Actor Harbhajan Mann starrer ‘Gadaar -The Traitor’ – Punjabi Cinema’s first Suspense – Emotional thriller, is slated for World-wide release on May 29. The star cast including Harbhajan Mann & Director Amitoj Mann came calling to ‘Chandigarh’ where they held a media meet in Fun Cinemas at Fun Republic. The event saw the stylish launch of the movie’s slick ‘Trailer’, which has been made by using top-of-the-line post production techniques, is very engrossing & will evince interest about the movie amongst Punjabi movie buffs. Apart from Harbhajan Mann present at the media meet were Director Amitoj Mann & Mr. Sumeet Singh, MD, Unisys Infosolutions. The film has been Produced by — Unisys Infosolutions & Grandsons Films. 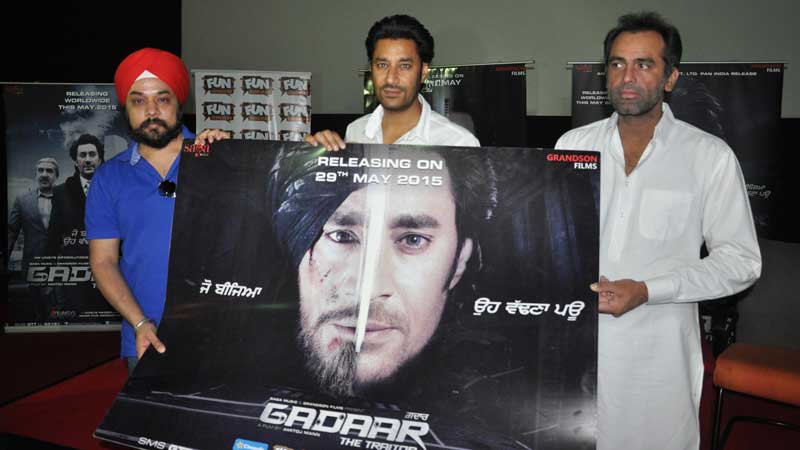 Said Mr. Sumeet Singh, MD, Unisys Infosolutions, “The film will be registering another first– the launch of as many as 7 digital posters before the movie hits theatres. We have already launched five & before release of the film, we plan to launch two more state-of-the-art, high tech digital posters of the movie.” Adds Sumeet, “We are also proud to say that ‘Gaddar –The Traitor’ has come with a new style of marketing – with major use of Social Media & very little use of TV Campaign. This method has already created a lot of hype about the film.” Unisys Infosolutions-Saga Music had entered the Punjabi Film Industry, on a turnkey basis about a year ago. The company is doing the entire gamut of operations like casting, production, distribution etc in house. Said Mr. Amitoj Mann, Director, “The film is a work of slick cinematography & special effects that certainly have never been seen in Punjabi Cinema. It is also a matter of pride that the trailer is listed as Number 1 in films category of Youtube.I am happy that there is a concern for bringing well made Punjabi films in front of audiences. We are trying to Corporatize Punjabi Film Industry to make Punjabi Cinema a well respected Industry in India.” While the public is well aware that Harbhajan Mann their favourite Singer-Actor is the lead actor in the film, viewers are in for a treat as Evelyn who has acted in Bollywood movies like  ‘Yeh Jawaani Hai Deewani’, ‘Nautanki Saala’ ,’Ishak’ & the super hit ‘Yaariyan’ will make her first appearance in a Punjabi Film. The title song of the movie ‘Gadaar – The Traitor’ has been picturised on the Bollywood Beauty.

The film will introduce Miss Australia Punjaban Pageant winner Ms Manpneet Grewal. Harbhajan Mann, a Pioneer in Punjabi Music & Film Industry will pack in a lot of surprises in the movie as he has been cast in a completely different look. Said Harbhajan Mann, “‘The star cast & crew of ‘Gadaar-The Traitor’ recently held a tour of Malaysia and the event also saw participation by the Sultan of Malaysia, who expressed his desire to see Gaddar at the time of its release.” The tour was part of Unisys Infosolutions –Saga Music’s effort to open new markets for Punjabi cinema.

Govt. Declares paid Holiday on march 8 to facilitate the...