NewZNew (Amritsar) : Prisoners usually plan to escape out of jail but this duo is planning to get back in! The adventure of getting back into the prison takes them to places and treats audience with lot of entertainment. Here comes ‘Vaisakhi List’, a movie with an unusual title and of course an unusual story too. And Tuesday became an unusual day for the Punjabi film industry when an unusual event took place at the Wagah border. The leading star of the film Jimmy Sheirgill was here to attend this special event where the theatrical of the film was released with the BSF Jawans. 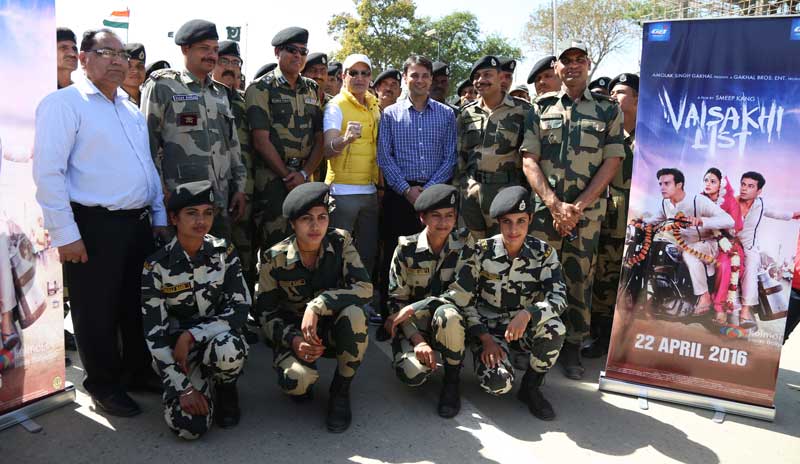 On this occasion Jimmy talked about the film. He said, “The film has comedy, action, drama, romance and thrill that is meant for the audience of every age group. Also Sunil Grover is debuting in Punjabi industry with this flick everyone doesn’t get such a chance to break through into films. The film is so different that it would certainly give him wings as an actor. The director has truly extracted out his true potential from this film.”

Also Read :   Twinkle Khanna shares what new normal is like

Jimmy also saluted and praised about the BSF Jawans on this occasion. He said, “Only because of our Jawans, we are all able to entertain our audience and live a peaceful life. We as actors are heroes just for few moments on the screen, but the Jawans are our heroes forever. I am quite happy to be here today and would like to thank the authorities for giving us a chance to promote our film amongst the real heroes.”

The audience can catch the trailer on YouTube.com. Film releases on 22nd April, 2016 all over.