Winners will get sponsored to study at Indian or Foreign University

NewZNew (Chandigarh) : After receiving a stupendous and encouraging response to the first three seasons of youth talent hunt program ‘Young Manch’, Videocon Connect the dynamic arm of the $10 billion Videocon Group, is geared up about conducting auditions in Chandigarh for the same. The auditions will be conducted on 27th November, 11:00 AM onwards, at North Country Mall. To register for the auditions for ‘Videocon Connect Young Manch 4’, just give a missed call on 1800 137 2020 or visit www.connectzone.in/youngmanch

‘Young Manch’ is a distinctive podium for youngsters to project their distinguishing talent in fine arts. The program was kicked off three years ago to embark upon a bond with the youth and strengthen their association with a zealous brand that Connect Broadband is. ‘Young Manch’ as a youth inclined forum has always been immensely famous and has received an overwhelming response from youngsters. 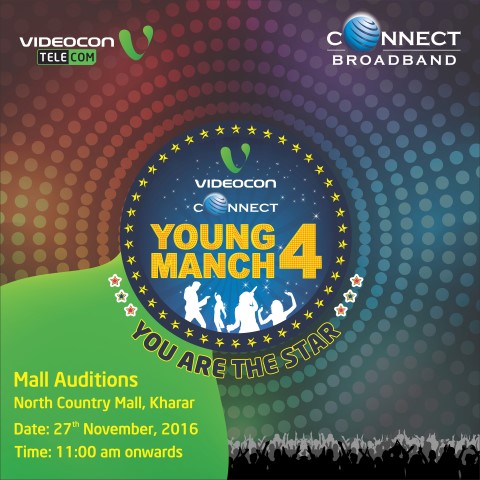 ‘Young Manch’ has given this country a reservoir of exceptional talent. The winners of ‘Young Manch’ have carved a niche for themselves in their respective fields.

To start with Gagan Verma, runner up of ‘Young Manch’ season 3 recently won Mr. Universe Super Model title in Supermodel Universe 2016 contest held in Bulgaria. He is the first Asian to win this title.

Rupali Jagga, the winner of the first season of ‘Young Manch’, is already a bollywood celebrity and made a huge mark in recently concluded Zee Sa Re Ga Ma as top finalist. She is now starting on a journey to international stage with leading bollywood stars.

Himanshu Kanojia who won the second season of ‘Young Manch’ has been shortlisted for fervently awaited TV reality show ‘Indian Idol’ and has begun his journey with a bang.

Sumit the suave winner of ‘Young Manch’ 3 is singing a song for a music album that boasts of names like the ace music director Parmish Verma and celebrated singer Jassi Gill.

And not just singers, ‘Young Manch’ has also provided the ideal podium for artists like Jai Harshvardhan, Radhey Shyam and Ruchika Dhankar, who have had the opportunity to appear on TV advertisements, TV serials and reality TV shows like ‘India’s Got Talent’.

‘Young Manch’ gave these youngsters the confidence that their talents had potential and that it deserved to be recognized and rewarded.

Speaking about ‘Young Manch’, Mr. Arvind Bali CEO Connect Broadband and Videocon Telecom, said “After the huge success of the first three seasons of Young Manch, we launched the fourth season zealously and we have received a tremendous response for the same. We want to give our youth the best platform to showcase their talent”. He further said “The initiative has endowed the country with talent like Rupali Jagga, Gagan Verma, Himanshu Kanohjia and others and our endeavor is to continue doing our bit to bring the best of talent out.”

Hitachi aims to become no. 2 Air Conditioner company in India...