Vivek High students recreate Mughal era through an English play – Noor-e-Babur: Noor-e-Babur -a first-of-its-kind massive production , on the persona of Mughal emperor Babur, a fierce conqueror, who was also the founder of the Mughal empire in India  that spanned more than 300 years, was presented by students of Vivek High School,Sec 38, Chandigarh. 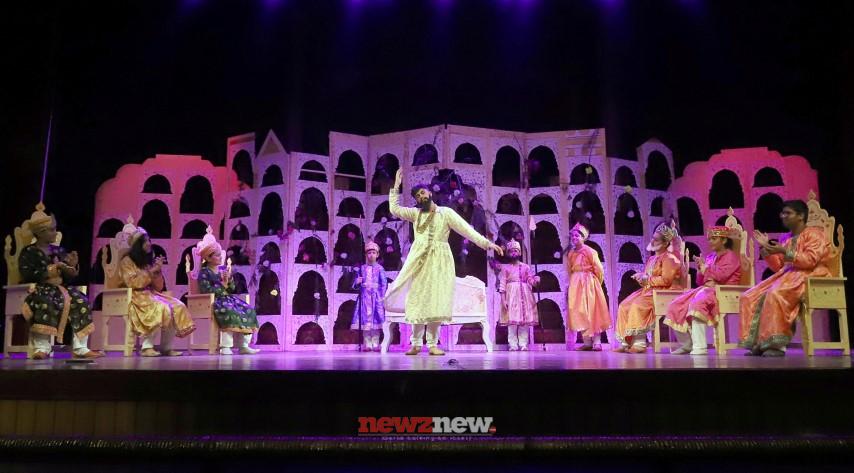 The unique production was the result of thorough research, study and creativity by Art  & Theatre Director, Nisha Luthra, who wrote and directed the play.

Principal Renu Puri said, “Noor-e-Babur is the production which is very close to our hearts as it showcased the talent of as many as 81 students of the Theatre Club. The play saw participation of students from class 4th to class 10th of our school. Through this play we come across the sensitive and culturally inclined side of Mughal Emperor Zahir-u-Din Babur.

By the theatrical adaptation of this historic text, not only did children get to know different aspects of  those historic legendary characters but they also learnt a lot about Persian poetry, darbar dances, royal singers, and the majestic Mughal era.”

Writer and Director Nisha Luthra said, “As part of the massive sets, the Mughal gardens, and the majestic arcs of that era showcased the magnanimity of a Raj Darbar. A live water body in the form of a royal fountain was placed in the middle of the Raj Darbar. To depict, enact and recreate the magic of the 16th century Mughal era was not at all an easy task for students as well as the teachers involved. Am happy that the play encompassing as many as 10 scenes was portrayed beautifully by the students.” Luthra added, “More than 15 carpenters built the huge darbar and mughal garden sets, these were beautifully carved and painted by the art team consisting of teachers and students.”

The play started with the celebration  in Darbar-E-Babur after he wins the battle  against the Lodhi King, Ibrahim Lodhi. The conversation with his son Humayun expressed the softer side of Babur and showed the fatherly love for his son.

The 90-minute play was enacted by the students in English, and had all the finer nuances of shayari , tarana, qawwali, padant and alaaps.  The perfect portrayal of kathak dances by students left the audience awe struck.  Another highlight of the ensemble was the music. Musicians came together from different parts of the country & composed beautiful  compositions with the flute, israaj, tabla, dholki, pakhawaj, sitar and harmonium under the guidance of Director Nisha Luthra to live a piece of  history yet again.

The play also depicted how when Humayun takes to sickness because of his overindulgence in the worldly pleasures, Babur offers his own life and breath for his son’s life. Finally the play comes to an end by the Royal Coronation  of Humayun by his mother.

Gorge on fresh and healthy vegetables & fruits online on shopapni.com

Protect your baby’s skin during the change of season