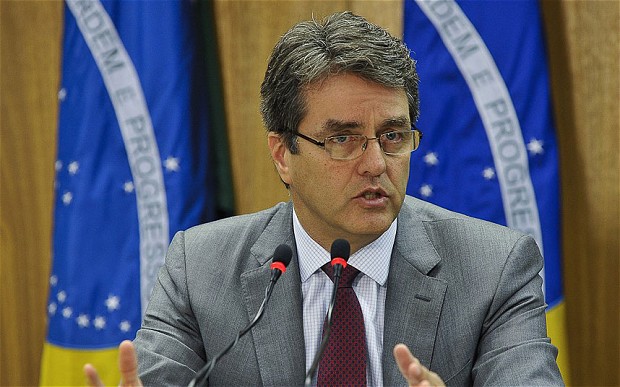 NewZNew (Jaipur) : World Trade Organisation’s (WTO) Director General, Roberto Azevedo, said that the Bali Package will deliver on the development front by enhancing developing countries’ ability to integrate into the world economy. Mr.Azevedo was speaking at The Partnership Summit which is being organised by Confederation of Indian Industry (CII) in cooperation with the Department of Industrial Policy and Promotion, Ministry of Commerce and Industry and the Government of Rajasthan in Jaipur from January 15-17, 2015. This was Mr. Azevedo’s first public address since the WTO turned twenty this year and he used the occasion to highlight India’s contribution to the multilateral trading system.

On the trade facilitation agreement (TFA), he noted that the benefits will be visible to Indian industry as competitiveness and exports will receive a boost once members ratify the agreement. The TFA will bring down trade costs by 15 per cent and bolster south-south trade. The WTO DG also said that the remaining issues under the Doha Development Agenda (DDA) will need to be refocused before the Ministerial Conference in Nigeria at the end of the year.

“As Director General, I have made development a priority”, he said, as the development dimension is crucial in balancing the global trading system.Mr. Azevedo stated that WTO provides developing and least-developed countries a seat in the rule-making table as they are not included in the current regional and mega-regional trade agreements.

Over the past two decades, the WTO has contributed towards the stability and predictability of the world trading system. Since 1995, the WTO has welcomed 33 new members including large economies like China and Russia and its 160 members represent 98 per cent of world trade. It has addressed some 500 trade disputes between members while keeping protectionist measures at bay.

Later, India’s Commerce and Industry Minister, Ms. Nirmala Sitharaman, said that the WTO should continue its good work in stemming protectionism and urged the WTO to be more responsive to the needs of developing and least-developed countries. Ms. Sitharaman expressed concern that some countries have started to equate only free trade with development.

The Minister highlighted that few developing countries have improved their share of global trade. LDC’s, according to her only accounted for 1% of global trade. She felt that in order to sustain growth,job creation and inclusive development must be emphasised, she said. Development encompasses other things besides trade including the burden to feed over 32 per cent of India’s poor who live under abject poverty – a concern that the WTO recognised. The Minister urged the members of the WTO to show the same urgency on food stockholding as the TFA under the Bali Package.

Development is at the centre of the Doha Development Agenda, and many issues of importance for developing countries such as subsidies and non-tariff barriers that are not part of free trade agreements can be addressed through the WTO. “Trade negotiations need to refocus on multilateral agreements which recognise the legitimate concerns of the developing countries”, she said.

Earlier welcoming the participants to the session, Mr.Chandrajit Banerjee, Director General, CII stated that the expectations from the WTO in delivering on the development front werehigh. He noted that twelve years of negotiations have resulted in the Bali Package, an important albeit small part of the Doha Development Round’s initial ambition to rebalance the global trading system. Much more needs to be done very quickly.