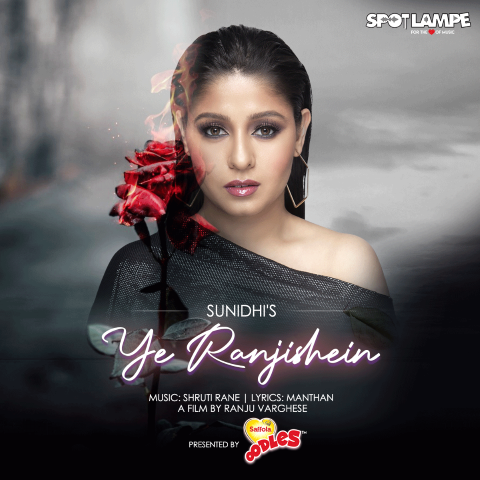 Sunidhi has released an independent track after 2 decades. An ode to love, ‘Ye Ranjishein’ is available on SpotlampE’s YouTube Channel from 23rd April. The song will also be aired extensively on 9XM, 9X Jalwa and on 9X Tashan.

Sunidhi’s solo single seems like a long awaited treat for her devoted fans!  Shruti Rane (her fan first) and now a music composer for ‘Ye Ranjishein’ has made her debut by creating such a fabulously powerful melody that is very appealing and has a great ring to it. S

he has tried to give this new age ballad, a blend of Urdu poetry fused with some electronica soundscapes. The shayari in Sunidhi’s sensuous voice preserves the retro sense in the song. It sounds classic and contemporary at the same time. Rare combination to come across!

The heartfelt lyrics by Rajesh Manthan perfectly complement this masterpiece! The music video of ‘Ye Ranjishein’ is filmed by the well-known director Ranju Varghese.

Sunidhi started her musical journey at a very young age. She was only 12 years old when she made her debut as a playback singer with the film ‘Shastra’. Her song ‘Ruki Ruki Si Zindagi’ from the film Mast in 1999 won her Filmfare RD Burman Award for New Music Talent.

In 2006, she was bestowed with her first Filmfare award for her rendition of the song ‘Beedi’ from Omkara. Besides playback singing, Sunidhi has also judged several television reality shows and she has also been involved in various charities and social causes. She has appeared four times in Forbes’ Celebrity 100 of India.

Commenting on the song launch, Kanan Dave, Business Head SpotlampE, said, “We are extremely pleased to collaborate with one of the most talented and versatile singers Sunidhi Chauhan and present this beautiful song! Her beautiful and dulcet voice mesmerizes the listeners and has a calming effect on them. The song is about eternal longing for your beloved that transcends beyond space and time! It is bound to create a plethora of emotions in one’s heart as she takes the listener through this surreal journey that only music can! Without doubt, ‘Ye Ranjishein’ will definitely top the music charts across the globe!”

‘Ye Ranjishein’ will be widely promoted across 9X Media Network and its social media handles. The single will also be available across all Audio & Video streaming platforms & on YouTube.

Top 5 incubators for startups gone virtual to fight the pandemic...