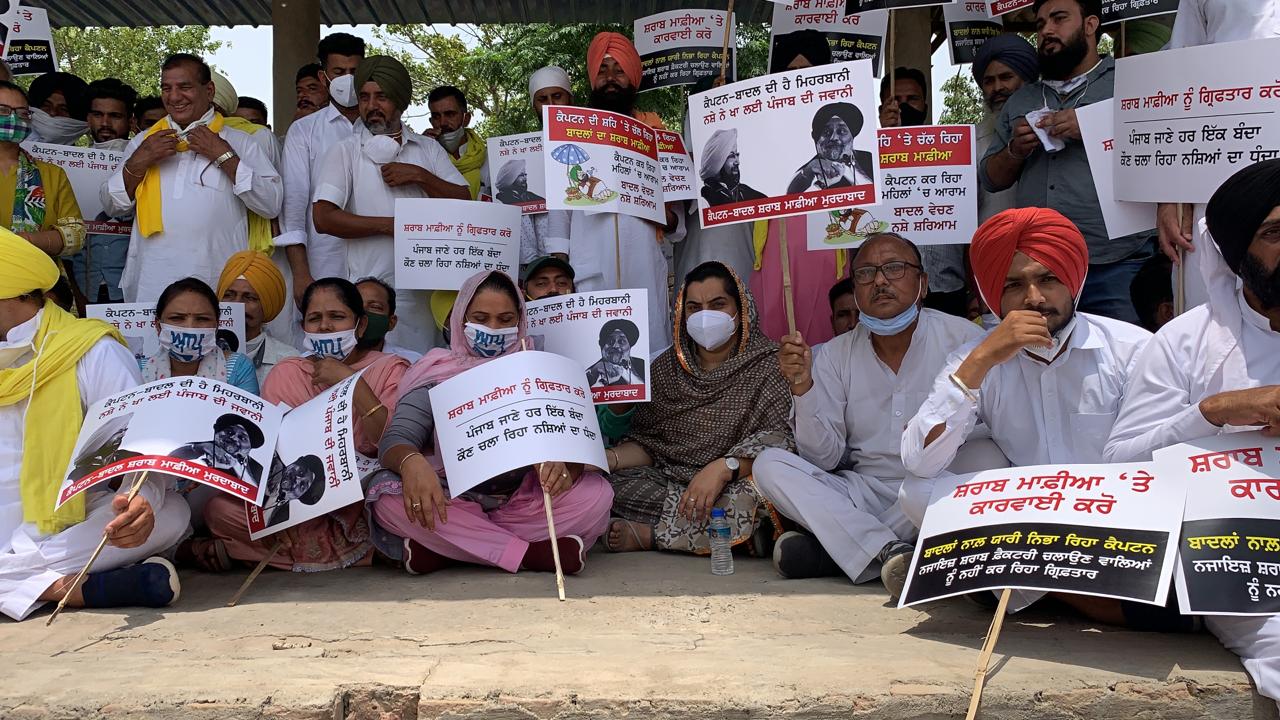 The AAP leaders raised slogans against the Captain government and the liquor mafia; demanding legal action against the managers of the illicit liquor factory and their patrons. AAP MLA and Kisan Wing Punjab president Kultar Singh Sandhwan in his address said that even today the leaders of the ruling Congress party and the Akali Dal Badal were running drug business together.

“This is the reason why Captain Amarinder Singh‘s government did not take any action in the case of a spurious liquor factory busted at Badal village,” he said.

Sandhwan said that Captain and Badal’s friendship had taken a heavy toll on Punjab. He said that a large number of people of Punjab had died after consuming spurious liquor during the Captain government’s rule, but no action was taken by the government against the liquor mafia.

AAP Youth Wing Punjab president and MLA Gurmeet Singh Meet Hayer said that if the Captain government had taken action against the culprits of spurious liquor factories in Tarn Taran, Rajpura, Ghanaur and other places; the liquor mafia would not have been in high spirits today. He said that the people of Rajpura and Badal areas knew which leader or MLA was running spurious liquor factories.

“Is the person running the spurious liquor factory in Badal village, not a relative of the Badal family?” questioned Hayer. He said that the news published in 2017 showed that Captain Amarinder Singh had ordered a vigilance probe against the alleged owner of the illicit liquor factory land in Badal village but this probe had not been completed till date.

Questioning Captain Amarinder Singh, whether the owner and manager of the spurious liquor factory busted at Badal village is close to former Chief Minister Parkash Singh Badal, SAD president Sukhbir Badal and his Finance Minister Manpreet Badal; MLA Baljinder Kaur said that even a month after the factory was busted, no action was taken by the Captain government.

She said that Captain Amarinder Singh had reneged on his promise of eradicating drugs by taking oath of Sri Gutka Sahib and now the case of spurious liquor factory in Badal village had proved that Akali Dal Badal was the ‘B team’ of the Congress party.

The AAP leaders said that in the case of a spurious liquor factory, who is stopping the officials of Punjab Police and Excise and Taxation Department. They said that the leaders in power in Punjab had plunged the youth of Punjab into the mire of alcohol, ‘chitta’ and other drugs.

The AAP leaders submitted a memorandum to the SDM and demanded an investigation in the case related to spurious liquor factory busted at Badal village, to be done by the present judge of Punjab and Haryana High Court and stern action against the person who owns the factory land and the operators of the factory.