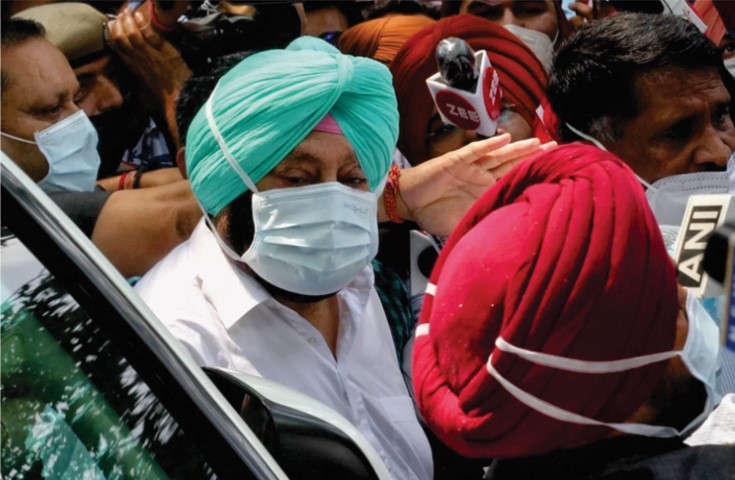 The meeting lasted for more than three hours.

The panel is headed by the leader of the opposition in the Rajya Sabha, Mallikarjun Kharge, and also comprises Congress’ Punjab in-charge Harish Rawat and former MP J.P. Aggarwal.

Speaking to the reporters, Amarinder Singh said, “The meeting was to discuss the preparations for the Assembly elections scheduled early next year. These are our inner party discussions and I don’t propose to share them with you.”

The rift in Punjab Congress surfaced after former state Cabinet minister Navjot Singh Sidhu along with Pargat Singh opened a front against the Chief Minister.

The All India Congress Committee (AICC) was forced to constitute a committee to listen to the grievances of its Punjab leaders, after a group led by Sidhu suggested change in the state leadership. However, sources said that there has been no discussion on replacing Amarinder Singh.

The Congress wants to pacify Sidhu and retain him in the party by making some minor adjustments, without going for a major shake-up, sources said.

The panel has already discussed the issue with former Congress President Rahul Gandhi, besides meeting the party MPs from Punjab and the ex-state unit chiefs.

Disgruntled Congress leader Sidhu, who has targeted Amarinder Singh on various issues, including the 2015 sacrilege case, had met the Congress panel on Tuesday and presented his views.

Interacting with reporters after the meeting, he had said: “I came here on the call of the party high command and I have presented people’s voices from the grassroots level to the party. My stand on democratic power remains the same that the ‘power of the people’ must return to the people. Every Punjabi must be made a shareholder in Punjab’s progress.”

On Thursday, Anandpur Sahib MP and former Union minister Manish Tewari, along with Congress spokesperson Jaiveer Shergill, had met the panel. Following the meeting, they said that there is no rift in the party’s Punjab unit.

“There is no infighting in the Congress and the issues discussed with the panel are secret. This is a routine exercise for poll-bound states. This is not the first or the last time it’s happening in the party,” Tewari said.

“The ongoing discussion on Punjab is not a ‘crisis management’ exercise, but a ‘poll preparation’ exercise,” said Shergill.

UPSC NDA Result 2017 declared at upsc.gov.in, mark sheets will be...