Agitation & Legal recourse will be undertaken simultaneously to fight Anti-National Farm Laws, says Capt Amarinder: Punjab Chief Minister Captain Amarinder Singh on Monday vowed to fight the Centre’s malicious and anti-national Agriculture Acts constitutionally and legally, asserting that he will do whatever it takes to protect the farmers from the nefarious designs of the Government of India. 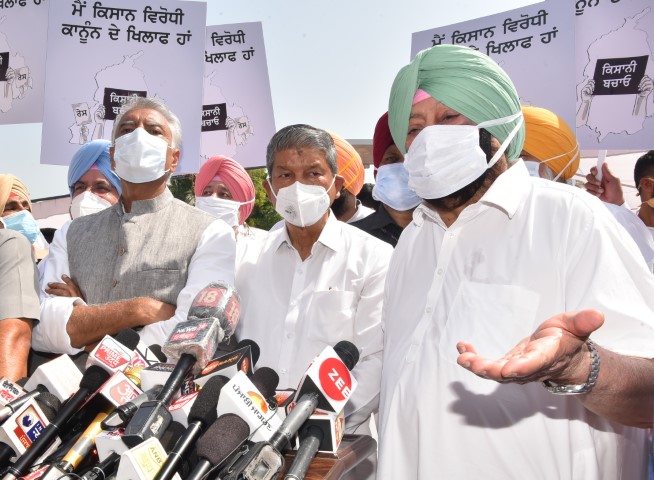 Addressing the media in Chandigarh and earlier at Khatkar Kalan, where he sat on dharna in protest against the new legislations, Captain Amarinder said he will be consulting with lawyers to work out the legal course of action for challenging the unconstitutional laws in the Supreme Court. Agitation and legal recourse will have to be undertaken simultaneously to fight these new laws and force the Union Government to rethink its decision, he said. Also Read: Fortis Hospital Launches State-of-the-Art Heart Failure Clinic and Heart Transplant Service

Asserting that he does not want Punjab’s youth and farmers to take to arms to fight for their right to live, the Chief Minister warned that these new laws will endanger the security of the border state of Punjab, as Pakistan’s ISI was always on the lookout for opportunities to foment trouble.

Punjab has lost 35000 lives to terrorism in senseless violence in the past and with the unrest among the farmers spreading to other states, the entire nation would be exposed to the ISI threat, Captain Amarinder said, adding that Pak-backed forces will try to feed on the angst in India. Pointing out that 150 terrorists had been nabbed in Punjab in recent months with huge caches of arms and ammunition, the Chief Minister said he will not let anyone disturb the state’s peaceful atmosphere, which the new legislations had the potential to do. Also Read: Reliance Jio’s gift to Sikh pilgrims &#8211; high speed 4G services at Sri Hemkund Sahib

AICC general secretary in charge of Punjab affairs, Harish Rawat, who was accompanying the Chief Minister, announced a signature campaign beginning October 2 to collect 2 crore signatures of farmers against the new Farm Laws. These will be submitted to the President of India on November 14 to coincide with Jawaharlal Nehru’s birth anniversary, he said, adding that Kisan Sammelans would also be organized to take the fight to its logical conclusion.

Describing Captain Amarinder Singh as the protector of farmers, Rawat said that the farming community was pinning its hopes on the Chief Minister Singh to lead them in this war against the black laws promulgated by the Centre. He took a dig at the Akalis, saying they had remained silent for a long time and were now coming to take credit for the fight for farmers’ rights.

Slamming the step-motherly treatment meted out on Punjabis and Punjab’s farmers to make big corporates like the Adanis happy, Captain Amarinder asked “Will the Adanis subsidise food for poor Indians?” These laws will spell the death-knell for the PDS system, apart from ruining Punjab and its farmers, he added.

Terming the new legislations as a total violation of the nation’s federal structure, the Chief Minister described the enactment of the Farm Bills as a black day for Punjab. The manner in which the laws were brought in through the Ordinances route and then pushed through Parliament without discussion was deplorable, he said, asserting that contrary to the lies being spread by the Bharatiya Janata Party (BJP) and the Shiromani Akali Dal (SAD), the Punjab government was never once apprised of the move to bring in such Ordinances.

Slamming the Akalis for defending the Bills for months, the Chief Minister again questioned what Harsimrat Badal was doing all this time and why she did not quit the Cabinet when the Ordinances were first brought in. “Why did the Akalis oppose us in the all party meeting? Why did they run away from assembly?” he asked, dismissing their hollow claims now on standing with the farmers. These claims are only meant to grab political power in Punjab, but nobody trusts them now, he said, adding that SAD’s decision to quit NDA was also the result of revolt from their own party members.

Captain Amarinder said those sitting at the Centre clearly knew nothing about Agriculture, which explained their bid to destroy the time-tested farmer-Arhtiya relations. The small farmers, whom his government had been trying to help over the past 3.5 years and who constitute more than 70% of the farming community, would be the worst affected, he added. In response to a question, he made it clear that the Punjab Congress manifesto spoke about widening the scope of the APMC Act and setting up hundreds of new Mandis/Yards to enable easy access to farmers.

The Chief Minister stressed the need for all to rise above politics to fight the Centre’s dangerous laws unitedly to protect Punjab and its people, especially the farmers. The fight at present was between the farmers and the central government, but the fact was that all powers of the states were being usurped by the Centre. “We have nothing left except excise from liquor sales, and all that Union Finance Minister Nirmala Sitharaman has to say is that it’s an act of God,” he quipped.

Pointing out that the Centre was asking why farmers in Punjab were protesting, he remarked” What else should farmers do? Distribute ladoos?” Punjab’s farmers had not only fed the nation through the years, including during the pandemic, but had also made India self-sufficient in foograins, said the Chief Minister, adding that with the funds flow to the Mandi Board also getting affected by these laws, the development work in villages will also come to a standstill.

Replying to a query, the Chief Minister said while Rahul Gandhi had already taken up the cudgels against the Farm Laws, the Punjab Congress would seek his support in leading a nationwide struggle against these legislations.

In response to a question, Captain Amarinder reiterated that no action under Section 144, which had been imposed for protection from Covid, would be taken against the farmers who are forced to protest for their livelihood.

PPCC President Sunil Jakhar said the battle would be a long-drawn one but Captain Amarinder Singh would protect the interests of the farmers in the same way as he had done earlier to save the state’s river waters.