Akali Dal protests against farm laws, to boycott all-party meet: Shiromani Akali Dal (SAD) President Sukhbir Singh Badal along with other MPs of his party staged a protest against the new farm laws inside the Parliament premises and said they will boycott the all-party meet called by the Prime Minister. 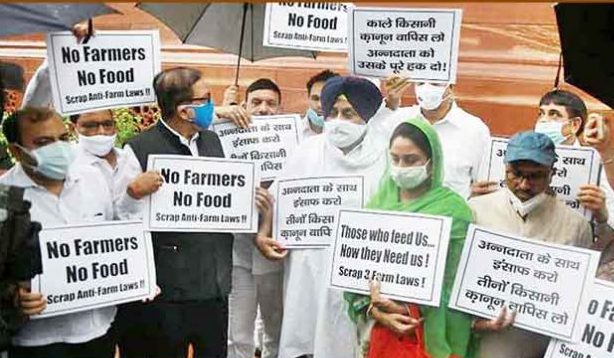 As they were raising slogans, Agriculture Minister N.S. Tomar walked pas them.

SAD MP Harsimrat Kaur Badal, who was a minister in the NDA government before her party moved out, raised slogans: “Stop disrespecting farmers.”

Badal said that they are boycotting the meeting on Covid-19 called by Prime Minister Narendra Modi at 6 p.m.

“Farmers are sitting outside, they are struggling … in the rain and the government is not bothered. This is the most important issue the Prime Minister should have taken up,” he said.

Modi has called an all-party meeting to discuss the Covid-19 management across the country.

On Monday, Kaur moved adjournment motion seeking discussion on the laws, which was rejected by the Lok Sabha Speaker.

On Sunday, Kaur had called for all opposition political parties to support the motion for the cause of peasantry.