NewZNew (Jalandhar) : In a move aimed at further cementing the bond of NRI brethren with their motherland, the Punjab Chief Minister Mr. Parkash Singh Badal today exhorted the Punjabi Diaspora to establish NRI schools across the state for connecting their future generations with their roots and glorious legacy of the state. 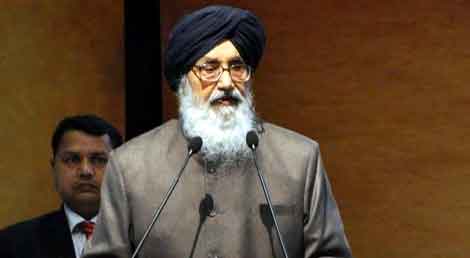 Addressing the massive gathering here during the second NRI Sangat Darshan here today, the Chief Minister said that through their sheer hard work and dedication the Punjabi NRIs had proved their mettle across the globe. However, he said that unfortunately the younger generations of the Punjabi Diaspora were somewhat detached from the land of their forefathers due to which the need of the hour was to reverse this trend by making all out efforts in this direction. Mr. Badal said that this goal could be achieved only if the NRIs take the initiative of opening NRI schools across the state.

Listing the initiatives taken by the state government to facilitate the NRI brethren in the state, the Chief Minister said that the Punjab government has decided to set up separate NRI cell in every district across the state for facilitating them in getting their routine administrative works done smoothly. He said that the Deputy Commissioners of every district would be asked to provide a separate room for this cell in the respective District Administrative Complexes (DACs) so that the NRPs could be able to get their work done in a prompt and hassle free manner.

Likewise, the Chief Minister said that he has asked the Home Secretary of the state to review the list of NRI Proclaimed Offenders (POs) so that no injustice was done to NRIs, who were not involved in any crime. Mr. Badal further said that the Revenue department has started a statewide campaign for the division of property falling in Joint accounts of the family adding that the department has been asked to complete this task by March end as the NRIs were facing a lot of problems in such matters.

The Chief Minister further said that Punjab Urban Rent Control Act has been implemented to secure NRI property. Likewise, he said that to save Punjabi youth from migration related frauds and harassment, the Prevention of Human Trafficking/Smuggling Act has been enacted. Mr. Badal further said that to ensure speedy disposal of NRIs cases in respect of Revenue, the powers of Assistant Collectors of the First Grade have been conferred upon all the District Revenue Officers of the State of Punjab in their respective districts to decide their cases. Likewise, he said that Special Civil Court for NRIs has been made functional at Jalandhar adding that network of NRI Police stations have been set up in the state along with a special NRI cell under the IGP rank officer.

The Chief Minister further said that to facilitate the Punjabis settled abroad 38 NRI Numberdars have been appointed in the state. Likewise, he said that Punjab Compulsory Registration of Marriage Act, 2012 has been enacted and even Naib Tehsildars have been authorized to register marriage. Mr. Badal said that in order to safeguard the interest of NRIs the state government has set up NRI Commission in Punjab.

Similarly, the Chief Minister said that 10% reservation in Industrial/ Residential plots have been made by the state government to enable the NRIs in purchasing property in the state. In the same manner he said that a scheme for village development through joint investment by NRI and Government has already been initiated. Mr. Badal further said that for the first time NRI Journalists have been given Accreditation facility and also benefits of Free Accidental Insurance cover.

Meanwhile the Sangat Darshan for NRIs got an overwhelming response from the Punjabi Diaspora as the venue of this event was packed with the NRIs hailing from Jalandhar, Kapurthala, Hoshiarpur, Pathankot, Gurdaspur, Tarn Taran and Amritsar districts. The Chief Minister personally interacted with the NRIs during the Sangat Darshan in the presence of the top brass of the state government and passed on necessary directions to the officers/ officials for the immediate resolution of their issues. Mr. Badal remained at the venue for the entire day to patient hearing to the grievances of hundreds of NRIs.

Highlighting the importance of this Sangat Darshan program, the Chief Minister said that it was on record that this flagship program of the state government has always been instrumental in mitigating the woes of common people. He said that the concept of Sangat Darshan was an integral part of state’s governance as it virtually brought the government at the doorsteps of people thereby bridging the communication gap between the masses and administration, which normally hindered the process of progress. Mr. Badal further said that besides acting as a catalyst for redressing the grievances of people, the Sangat Darshan programs were also helpful for the state government to adjudge the working of officers of the various departments.

Earlier welcoming the Chief Minister and other dignitaries during this Sangat Darshan, NRI Affairs Minister Punjab Jathedar Tota Singh said that these Sangat Darshans would go a long way in mitigating the woes of the NRP brethren.