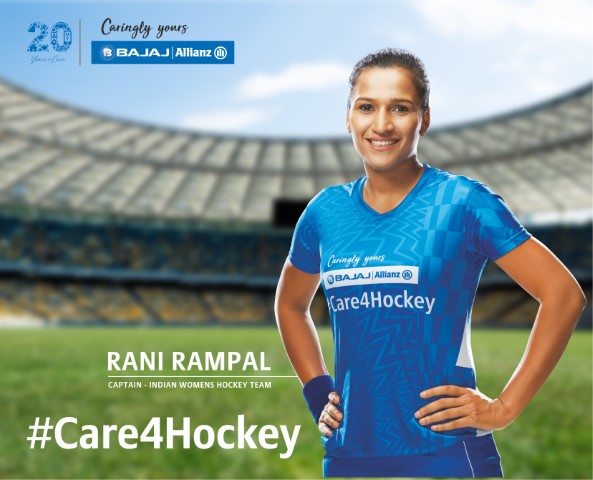 The thought behind this campaign is to elevate field Hockey’s recognition in our country and showcase how supporting a person to attain their goals can enable them to make a difference in the society.

‘#Care4Hockey’ is a one of its kind campaign from the Company with a goal to support the development of Hockey in India from the grass-root level. Bajaj Allianz General Insurance associated with Rani Rampal – whose relentless determination, focus on her goals, and a never-give-up attitude along with the timely support she received, helped her stand where she is today.

She is an inspiration to a generation of women who dare to achieve their dreams by defying all odds. Thus, resonating with the brand’s proposition that hard work, focus along with care, and support from those around you can help you reach your goal line.

Commenting on the occasion, Mr. Tapan Singhel, MD & CEO, Bajaj Allianz General Insurance said, “Bajaj Allianz General Insurance is a brand which resonates with care for people, passion to make a difference and a spirit to lead the change. The ‘#Care4Hockey’ campaign is an attempt to take these brand values forward to support Hockey to not only make a mark in the world, but to also encourage more people to pursue their passion for this sport thereby keeping Hockey alive in India. I’m sure that this campaign with the support from Rani Rampal and One Thousand Hockey Legs project will help take this message to the last mile and will encourage people to follow their ambition, break records and create history for our country.”

Sharing her thoughts on the campaign, Rani Rampal, Indian Women’s Hockey Team Captain & Padma Shri Award winner said, “A word of encouragement and support from people around you plays a crucial role in helping you achieve your dreams. I’ve had my share of challenges to be where I’m today and I’m glad to be associated with a brand like Bajaj Allianz General Insurance which stands true to its philosophy of ‘Caringly yours’ by providing the much-needed support to Indian Hockey and helping aspirations of many come true. I believe that this will surely go a long way in inspiring people to pursue this sport in India.”

Learning from Rani’s journey and the struggles of many like her, Bajaj Allianz General Insurance has gone one step ahead and has associated with One Thousand Hockey Legs, a flagship project of Delhi-based NGO – Hockey Citizen Group. As a part of this association, the Company will contribute towards supporting underprivileged children pursuing hockey in terms of coaching, nutrition, and equipment.

With this campaign, the company hopes to support in the development of hockey at the grass-root level, thus providing an opportunity for many, in making their mark in the world and become future role models of tomorrow.

Commenting on the association, Mr. K. Arumugam, Founder and CEO, Hockey Citizen Group said, “One Thousand Hockey Legs, which is a flagship project of our NGO, has been working relentlessly towards providing necessary support and opportunity to underprivileged children who aspire to play Hockey. I really appreciate Bajaj Allianz General Insurance for extending their support to empower these children whose enthusiasm to play Hockey will help this sport prosper in our country.”

Also Read :   Instagram vs. Snapchat Stories : which one is doing better?