NewZNew (Chandigarh) : The Trailer of upcoming Punjabi Film ‘Tiger’ was unveiled by the film’s cast & crew in Wave Cinemas, City Emporium Mall, Chandigarh during a Press Meet. ‘Tiger’ has been produced by Blue Jay Motion Pictures and Nanda Arts & Entertainment Inc & is set for a worldwide release in September 2016. Unisys Infosolutions is releasing and marketing the film in India. The Trailer was also screened for the gathered media people at the media meet. The lead Star Cast of ‘Tiger’—the well known singer turned actor Sippy Gill & the beautiful Actress Ihana Dhillion were present. Two important names behind the film Sartaj Singh Pannu, Director and Sagoon Wagh, Co Producer of the film also participated in the unveiling of the Trailer.

Sippy Gill who acted in ‘Jatt Boys Putt Jattan De’ & has hit songs like Rumaal, Zindabad Ashiqui, Chandigarh, Jatt Kuwara, Botlan etc to his credit is in the male lead as Pali. “Tiger is a film set in rural Punjab. The makers of the film have done a lot of research to make it a realistic film.” Said Sippy Gill.

In fact the USP of the film is the very experienced & famous names from Bollywood who have made it. The movie has been Directed by Sartaj Singh Pannu a Mumbai based filmmaker who also directed critically acclaimed & National award winning Hindi film ‘Nanak Shah Fakir’, his first Hindi film was ‘Soch Lo’ which was also the first Indian film to be Premiered In Paramount Studios( Hollywood) .Pannu is making his Punjabi film debut with ‘Tiger’.  ‘Tiger’ has been  produced jointly by  Joginder Singh Gill, Jagmohan Nanda, Bobby Bajaj and  Sagoon Wagh — who was with ABCL and produced Hindi feature Film ‘Viruddh’, under the banner of Amitabh Bachchan Corporation. It is noteworthy to mention here that Sagoon Wagh — has worked with renowned Directors like Mahesh Manjrekar,David Dhawan and actors like Amitabh Bachhan, Sanjay Dutt,Govinda,Ajay Devgan, Suniel Shetty to name a few. 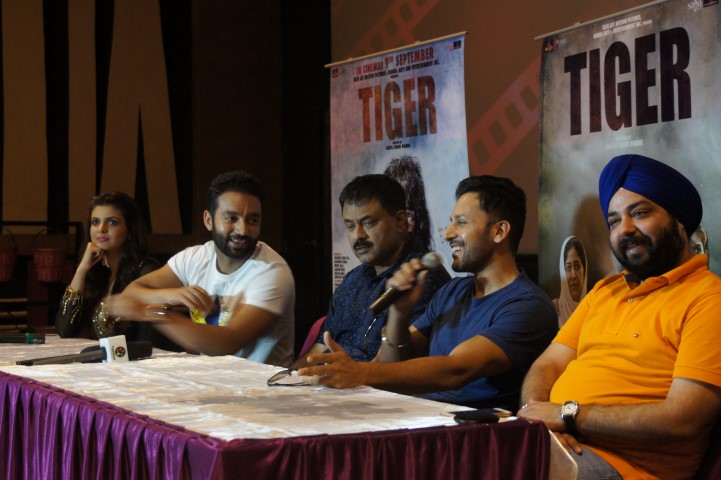 “All actors have given great performances in the film and i am happy with the outcome. The action will give one a feel of watching a Bollywood film. It has all other ingredients of

It was revealed at the press meet that ‘Tiger’ is an action revenge thriller. It’s a poignant story about a young boy who has to go to jail for no fault of his. The boy’s life breaks apart & his family is shattered by  nemesis ofBoy’s Father’. “The story of the film revolves around how the boy when he returns from jail uses a unique set of skills learnt during his incarceration, to inflict revenge on the people who ruined his life.” Said Sartaj Singh Pannu, Director.

Ihana Dhillon who debuted in the Punjabi Movie ‘Daddy Cool Munde Fool’ & did the lead role in ‘Ji Karda’ is the lead actress as a Ekum a Canadian Journalist . “I am quite excited about the movie as working under such Industry stalwarts like Sartaj Sir has been a great learning experience.  I am sure that the movie will create a buzz when it hits theatres.” Said Ihana.

‘Tiger’ in a way points towards the interest being shown by Bollywood Industry big wigs for Punjabi Cinema in particular. This will help Pollywood in gaining prominence in the regional film-scape of India.

KAFF sinks : A perfect addition to a stylish kitchen