newznew (Zirakpur) : Curtains came down on CCLF 2017 going on at Dikshant Global School, VIP Road, Zirakpur. The last day started with Vikram Sridhar’s session –Stories of food: Chappatis & Dosas which was a treat for all foodies. Starting with the story of vadapav, Vikram went on to recount how new recipes evolved due to mistakes made in the kitchen. No doubt, cooking served as a metaphor for the act of writing in his session.

Srivi Kalyan’s workshop becoming Sky, Rain, Bird, Frog was a lesson at unabashed self-expression. A child’s creativity gets hampered when he has to conform to set standards. At the beginning of the workshop, the children had to talk and behave like their favorite animal or bird. This was followed by an attempt to draw the same, to give vent to their imagination. The kids also went on to frame poems and stories about what they had drawn. 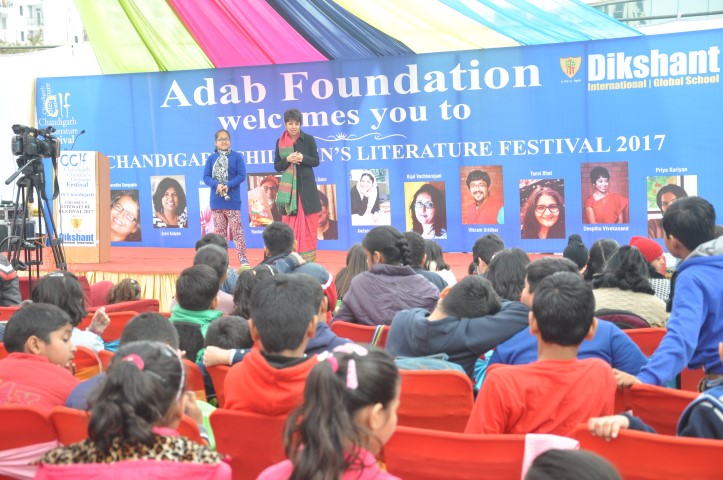 Prolific writer Andaleeb Wajid conducted a creative writing workshop for the future Ruskin Bonds. At the outset, Andaleeb confided to the kids about the dilemmas facing a writer. Talking to the children about popular authors, Andaleeb encouraged them to unravel the essentials of a gripping tale. Realistic characters, according to Andaleeb, were the hallmark of a brilliant writer. Finally, the kids were made to realize that stories can be found everywhere if one is open to new ideas and is a keen observer.

‘Tiffin Box tales’ was an interesting workshop conducted by Bijal Vachharajani. Bijal asked them to open their tiffins and see what their mommies had given them to eat. The interaction was taken a step further when the children had to analyse the impact of imprudent agricultural practices on soil and climate. The kids weaved stories about the lives of different food items and made presentations about their journey.

An Illustration Workshop ‘Drawing with Princess Easy Pleasy’ by Priya Kurian saw young participants appreciate the range of emotions which literature is capable of portraying. The children listened with rapt attention to the story of Princess Easy Pleasy. The story served as a resource to build upon when the kids started making illustrations of the characters which they had liked.

“The festival received a very good response as it was attended by as many as 1500 students of not just Dikshant Group of Schools that were hosting it but schools from tricity & beyond. Mindtree School, Ambala, Chitkara International, Tribune Model School, Shri Aurobindo School, Kids R Kids & YPS Patiala all participated in the literary fiesta for children.” Said Mitul Dikshit, Chairman, Adab Foundation.