Ranked third in the most clean university across the country

Chitkara University has been ranked third among the cleanest Higher Educational Institutions in the Country by the Ministry of Human Resource Development Govt of India under the Swachhta Ranking 2017. The national level award function was organised by Ministry of Human Resource Development at New Delhi yesterday in which Union HRD Minister Shri Prakash Javadekar gave away the awards. 3500 institutions participated from all over India in the SWACHHTA Ranking 2017, out of which best 25 institutions got selected in 4 categories for Swachhta Award. 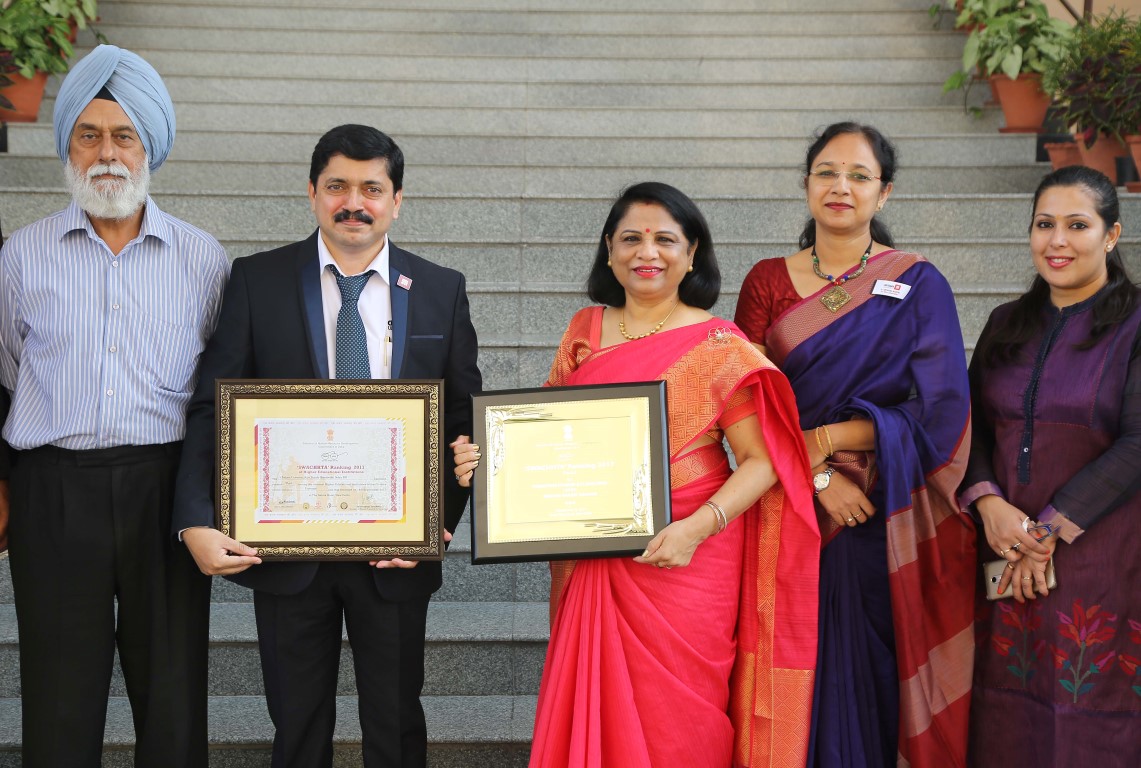 After initial scrutiny the University was examined by a team of UGC on 23 August 2017. The ranking was done based on two components, in-campus hygiene which had 85 percentage weightage, and activities outside the campus, which had 15 percentage of weightage.

University was also examined on innovative technology used for solid and liquid waste management, hostel and kitchen hygiene, apparel of staff, the extent of mechanization of food preparation, availability of cooking gas, chimneys, water storage and pipeline systems, quality of drinking water and green cover on campus. Chitkara University has a paper recycling plant where 100% waste paper recycling is done to produce papers, folders, envelopes, and carry bags for in campus usage. Hydroponic farming is done in the campus based on nutrient film technique thus producing vegetables and fruits for consumption within campus. Infrastructure design of the University supports natural air conditioning, energy absorbent buildings in terms of light and air efficiency to avoid air conditioners. University was also acknowledged for 100% waste water recycling by dual plumbing and effective and effluent treatment plant on the campus.

In activities outside campus, the Ministry also awarded marks for adopting villages and activities taken to achieve cleanliness and hygiene. Chitkara University under the proficient Chairmanship of Dr. Ashok K Chitkara and Dr. Madhu Chitkara has adopted nearby villages and provides free education to children and opportunities for self employment to adults. The university also provides cleanliness and health awareness programs in addition to extending health facilities to the adopted villages.

In their message Chancellor & Pro-Chancellor said,” We are proud of being recognized by the government, earlier for the Environment Leadership Award 2017 on 15 July 2017 by Government of Himachal Pradesh and now being bestowed with Swachhta Award 2017 for our inclination towards Swachh Bharat Mission. At Chitkara University we believe in transforming the lives of students and bringing about a change in the entire academic scenario by providing them a congenial and healthy environment to flourish”.

300 COVID Vaccinations for 18 Plus at Fortis Mohali