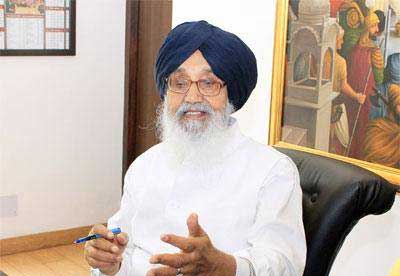 NewZNew (Chandigarh) : In a move aimed at saving the farmers of Kandi areas of the state from the scourge of wild animals, the Punjab Chief Minister Mr. Parkash Singh Badal has asked the Agriculture Department to come up with a special scheme of providing financial assistance to these farmers for fencing their agricultural land.

Acting on the recommendations of the Chairman Punjab Farmers Commission Dr GS Kalkatt, who had highlighted the plight of these farmers before the Chief Minister in a meeting, Mr. Badal has asked Additional Chief Secretary (Agriculture) to formulate a special scheme so that farmers of Kandi areas could be given financial assistance for installing fence around their land. Expressing concern over the plight of these farmers whose crops were ruined by the wild animals, Mr. Badal said that these poor farmers must be extended a helping hand by the state. He had also asked the Additional Chief Secretary (Agriculture) to explore the feasibility of promoting Horticulture in this area in a big way by providing subsidies to the farmers so that they could be benefitted from it.

In another significant decision, the Chief Minister has also asked the agriculture department to make all out efforts for promotion of Soyabean cultivation in the state as it could prove to be a boon for the farmers of the state. Mr. Badal has asked Additional Chief Secretary (Agriculture) undertake the trails of SL 958 variety of Soyabean, recently developed by the PAU, in the farms across the state to gauge its performance. He has asked the Additional Chief Secretary (Agriculture) to present its detailed report after successful trial.

Likewise, in order to tackle with the problem of burning of paddy straw, the Chief Minister has also asked the Agriculture Department to prepare the plan for promoting ultra modern straw choppers in the state by providing maximum subsidy on it. He said that these ultra modern choppers available at a price of Rs 2.25 lakh must be popularized by giving subsidies besides by providing them to Agro Service Centers/ Individual farmers. In the same manner, Mr. Badal has asked Additional Chief Secretary (Agriculture) to hold a meeting with manufacturers of agriculture equipments to prepare these ultra modern straw choppers.

Industry will require close to 109 million skilled workforce over the...