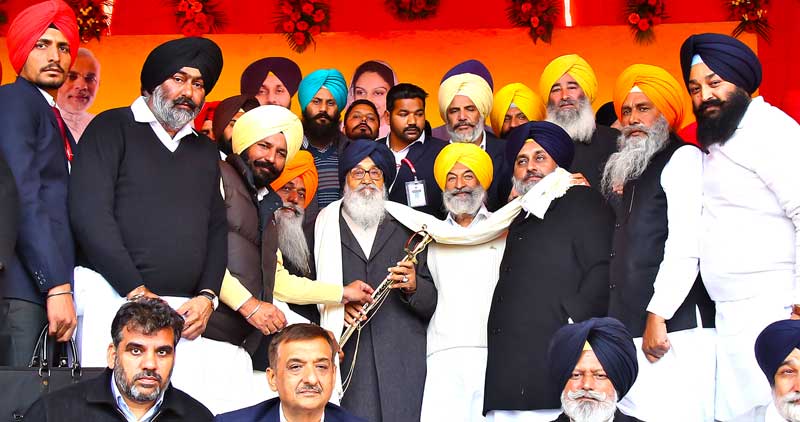 NewZNew (Rupana/Sri Muktsar Sahib) : Evoking the rich historical legacy of Maghi, the Punjab Chief Minister Mr. Parkash Singh Badal today exhorted the people to make a firm pledge for forming the SAD-BJP alliance government in the state for third consecutive term to complete the ongoing development works in the state.

Addressing the mammoth gathering here on the political conference, the Chief Minister said that on this sacred occasion every Punjabi must vow to bring back the alliance to power so that the ongoing work of state’s development could be accomplished. Mr. Badal said that due to the pro-people and development oriented policies of the state government Punjab was on the zenith of development and peace. Mr. Badal further said that this could be sustained only and only if SAD-BJP alliance was voted to power for third time.

Recalling the glorious legacy of Shiromani Akali Dal, the Chief Minister reminded the people that the party had relentlessly worked for safeguarding the interests of the state. He said that each and every worker of SAD was committed for the cause of state due to which they had even suffered many hardships. “Contrary to it the other political parties have harmed the interests of the state for their own motives” added Mr. Badal.

Coming down heavily on Aam Aadmi Party, the Chief Minister said that that it was a ‘bunch of fugitives and rumour mongers’, who were trying to grab power in state by misleading Punjabis. Mr. Badal said that the leaders of AAP were basically braggers who were trying to divert the attention of people from basic issues. He said that though Delhi Chief Minister Mr. Arvind Kejriwal was not aware of basic topography of the state but he was dreaming to capture power in state by raising hollow slogans. “Kejriwal is totally unaware of rural life of state and he cannot even differentiate between the varieties of crop”, added Mr. Badal.

Terming state Congress Chief Captain Amarinder Singh as an ‘undisciplined soldier’, the Chief Minister said that despite of his claims that he had served the Army Captain has not learnt anything from highly disciplined force. He said an Army man never disobeys his seniors but Amarinder arm twisted the entire Congress high command to grab Captaincy of Congress. Likewise, Mr. Badal said that despite of two back to back debacles Captain was clinching to post of state Congress Chief, which was not a trait of any soldier.

Lashing out at Captain Amarinder Singh and Aam Aadmi Party (AAP) leader Mr. Sucha Singh Chottepur for frequently changing sides to suit their interests, the Chief Minister said that these leaders were once sworn Akalis but have changed sides for the sake of power. He said that these leaders have dejected their mother party for the sake of vested interests, so people could never rely on them. Mr. Badal further said that people of the state would never forgive these politicians who have changed the party just for their personal motives.

Taking the Congress party to the cudgels, the Chief Minister reminded the people that this party has done lot of injustice with the state by snatching its capital, legitimate share in river waters and Punjabi speaking areas. He said that the Congress party had inflicted a deep wound on Sikh psyche by attacking the Golden Temple and by killing thousands of innocent Sikhs during 1984 Sikh carnage. Mr.. Badal said that Congress had ruined the economy of state by meting out step motherly treatment to Punjab.

The Chief Minister said that the Congress party and the radicals, who were hell bent upon disturbing the hard earned peace of the state, were the two faces of a same coin. He said the Congress party has always pursued the policy of divide and rule for its own interests and now that it has joined hands with for disturbing the hard earned peace of the state. However, he said that SAD-BJP alliance was committed for making any sacrifice to ensure peace, communal harmony and amity in the state.

Speaking on the occasion, the Punjab Deputy Chief Minister S. Sukhbir Singh Badal made a very strong pitch for development and said that Shiromani Akali Dal (SAD) is the only party which has accomplished what it preached and promised to the people of the state. He promised that if voted to power again in 2017, the project of concretization of all the streets and drains of more than 12400 villages across the state would be done.

Showering praise on the Chief Minister S. Parkash Singh Badal while addressing a gathering of gigantic proportions on the auspicious occasion of Maghi here, the Deputy Chief Minister greeted the people on the historic occasion and said that S. Parkash Singh Badal is a people’s man and a matchless leader who has always kept the interests of common people uppermost in his mind.

Describing SAD as a party of commoners having also a great legacy of martyrdom, S. Sukhbir Badal thundered that SAD has always fought for the unity and integrity of the country. He said that SAD history is replete with the numerous instances of sacrifices made for the freedom of the country as more than 80 percent of the people imprisoned in ‘Kalapani’ or hanged were Punjabis. S. Badal also elaborated that after independence, the SAD fought for the rights of farmers which resulted in ameliorating their plight to a great extent.

Terming SAD as a development oriented party S. Badal said that it is only the SAD government which has cared for the welfare of all the sections of society. Taking the development plank further, he disclosed that the SAD government had accomplished several pro-people measures for e.g. waving of tubewell bills, making Punjab power surplus, 24 hours power to the consumers and the ‘Dhanis’. He also elaborated that Rs. 1500 crore would be spent on the up gradation of link roads besides Rs. 20,000 crore are being spent on the widening (4 and 6 laning) of roads.

He further said that every assembly constituency would get Rs. 25-30 crore for development projects. Divulging more, the Deputy CM listed out the other people friendly measures of the state government for e.g.— health and accidental insurance scheme, ‘Mukh Mantri Tirath Darshan Yatra Scheme’, nearly 1,20,000 jobs and commencing of operations by 2174 ‘sewa kendaras’ in next 3 months providing various citizen centric services at their door steps.

In a scathing attack on Aam Aadmi Party (AAP), S. Sukhbir Singh Badal said that Delhi Chief Minister Arvind Kejriwal cannot be trusted because he didn’t walk his talk. S. Badal said that Kejriwal went back on his promise to not accept political office and fight elections. He said that Kejriwal provided political posts and government accommodations and vehicles to his party legislators in stark contravention of his promises besides enhancing the salary of his MLA’s to the tune of Rs. 2 lakh which is higher than Prime Minister.

Accusing Kejriwal of hobnobbing with congress for the sake of attaining power and not doing anything on development front, Deputy Chief Minister said that Kejriwal is more of a drama king than a leader and so the people must be beware of him and not fall into his trap. He also said that Punjab is witnessing spate of developments and so appealed to the people not to put a spanner in the progress journey by falling for the false promises of other parties.

Taking a strong dig at Congress, S. Sukhbir Badal said that the balloon of the party had burst and elevation of Captain Amarinder Singh to the post of PPCC chief won’t make a difference as the congress is nowhere in the picture.

Exhorting the party cadre to gear up for ‘Battle-2017’, S. Badal said that he has not seen more energetic and youthful workers other than SAD’s. He said that if SAD is strong, so would the Sikhs and Punjab.

Earlier, in his address Rajya Sabha MP Mr. Sukhdev Singh Dhindsa recalled the sacrifices made by Shiromani Akali Dal in safeguarding the democracy of country by waging protest against emergency imposed  by the then Prime minister Mrs. Indira Gandhi. He also recalled the role played by Chief Minister Mr. Parkash Singh Badal Badal in safeguarding the interests of the state and its people.

In his address Rajya Sabha MP Mr. Balwinder Singh Bhunder said that none of the leaders of state could match the stature of Chief Minister, who has devoted in his entire life for the state and its people. He slammed the Congress and AAP for misleading the people by their divisive agendas.

In his address Lok Sabha MP Prof Prem Singh Chandumajra said that AAP has totally failed in fulfilling the aspirations of people of Delhi ever since formation of their government. He said that the state government had taken a number of measures to safeguard the interests of the people adding that Punjab was only state to give free power to farmers.