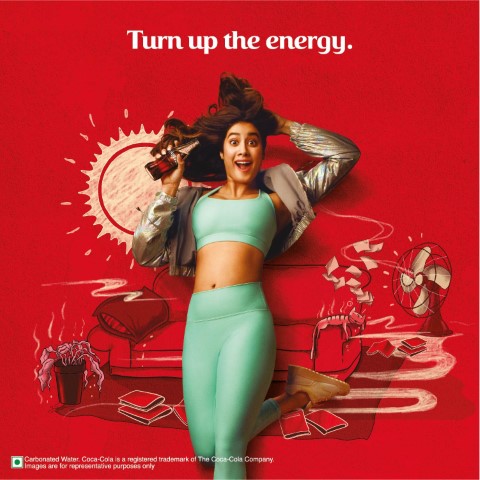 With this new campaign, Coca-Cola aims to encourage people, especially the youngsters in the country, to pause their hectic schedules, and take a break – with a Coke! The brand empathizes with the youth and understands that ‘taking breaks’ is now more important than ever, especially during these unprecedented times.

As the younger population grapples with everyday hurdles in their personal and professional lives, the lively campaign film urges them to take short breaks regularly and enjoy a Coca-Cola alongside, to rejuvenate them in body and mind, and spirit.

Commenting on the TVC, Kaushik Prasad, Director – Coca-Cola Category for India & South West Asia, said, “The last two years have been unprecedented for everyone, and people across age-groups have found themselves grappling with multiple uncertainties and challenges. The pandemic has particularly impacted youngsters who have juggled between multiple responsibilities, to cope with the new normal and often find themselves needing breaks to recharge. We at Coca-Cola understand this and with our new campaign, urge our audiences especially the youth to take these much-needed breaks during their hectic days, esp when their energy is down to uplift, energize & recharge themselves with a delicious “Thanda” (cold Coke).”

He further added, “The youth icons, Janhvi Kapoor and Ishan Khatter have brought their own liveliness and energy to the campaign film which is indeed very refreshing.”

Speaking on their association with Coca-Cola, Ishaan Khatter said “I am bubbling with enthusiasm on being the face of Coca-Cola, the beverage that is an indelible part of our lives! Excited to share this campaign for the OG ‘Thanda’ with everybody.”

Janhvi Kapoor added, “Coke is an iconic brand. It’s my go-to drink for every reason and season. I am delighted to be part of the Coca-Cola family. I look forward to energizing teens with a dose of ‘Thanda’ this summer.”

The quirky campaign by Coca-Cola India builds upon their concept of ‘Khud Ko Jagaa, Ek Thanda Lagaa’, and aims to position the beverage as the ‘perfect partner for when the slump gets to you and you need a break’. The film has been conceptualized by McCann World Group, depicts a young guy who accidentally boards the ‘Ladies Special’ bus because he’s exhausted and zoned out due to the peak-summer mid-day heat and can’t think clearly enough. To know what happens next, you’ll have to watch the TVC. Link below.

Sambit Mohanty, McCann Creative Head (South) says about the campaign “It’s peak summer, you’re fatigued and in a state of slump. What better than a chilled bottle of Coke to leave you feeling refreshed & uplifted! Our new ‘Khud ko Jagaa, Ek Thanda Lagaa’ campaign, is a manifestation of what happens in these circumstances. The films starring Ishaan & Janhvi play on the natural chemistry between them with Coke as a catalyst.”

Badal calls upon Media to give extensive coverage to Economic development...