NewZNew (STOCKHOLM) : The Coca-Cola Company and its global bottling partners (the Coca-Cola system) today announced they have met their goal to replenish, or in other words balance, the equivalent amount of water used in their global sales volume back to nature and communities. Based on this achievement, Coca-Cola is the first Fortune 500 Company to publicly claim achieving such an aggressive water replenishment target1.

The Coca-Cola system also announced progress against its water efficiency goal. The Company and its bottling partners improved water use efficiency by 2.5 percent from 2014 to 2015, adding to a cumulative 27 percent improvement since 2004.

Based on a global water use assessment validated by LimnoTech and Deloitte, and conducted in association with The Nature Conservancy (TNC), the Coca-Cola system returned an estimated 191.9 billion liters of water to nature and communities in 2015 through community water projects, equaling the equivalent of 115 percent of the water used in Coca-Cola’s beverages last year.

“This achievement marks a moment of pride for Coca-Cola and our partners. A goal that started as aspiration in 2007 is today a reality and a global milestone we plan to maintain as our business grows,” said Muhtar Kent, Chairman and CEO, The Coca-Cola Company. “Now, every time a consumer drinks a Coca-Cola product, they can have confidence that our company and bottling partners are committed to responsible water use today and tomorrow. We are keenly aware that our water stewardship work is unfinished and remain focused on exploring next steps to advance our water programs and performance.” 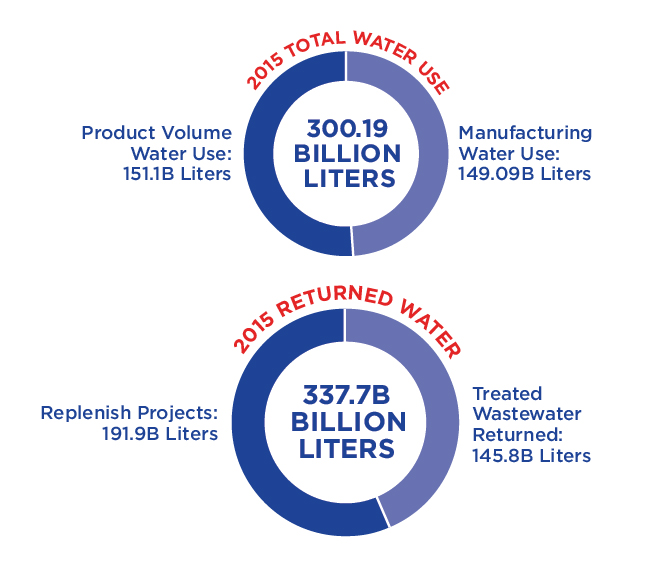 The Coca-Cola system has achieved its water replenishment goals through 248 community water partnership projects in 71 countries focused on safe water access, watershed protection and water for productive use. In many cases, projects also provide access to sanitation and education, help improve local livelihoods, assist communities with adapting to climate change, improve water quality, enhance biodiversity, engage on policy and build awareness on water issues. The program aspects mentioned in the preceding sentence do not contribute to Coca-Cola’s replenish volume.

Replenish performance is independently reviewed by LimnoTech and verified by Deloitte. That work is reflected in a 1,188 page report. The methodology for calculating water replenishment benefits was created in collaboration with The Nature Conservancy and LimnoTech. It was the subject of scientific technical peer review to verify its accuracy, and uses generally accepted scientific and technical methods. Projects are reviewed annually and evaluated using this methodology.

Some replenish projects directly return water to the source we use while others are outside the watershed our plant uses but are important to help meet needs of local governments, communities and partners where there is a pressing need. Coca-Cola and its partners seek projects that have a direct benefit, can be scaled up to have greater impact by reaching more people and parts of an ecosystem, are easy to learn from and replicate in other places where the challenges are similar, and can be built to be sustainable by the community over time, continuing to replenish water. These efforts, as well as new projects, frequently address local source water vulnerabilities and balance additional sales volume as
Coca-Cola’s business continues to grow.

At each of its 863 plants globally, Coca-Cola requires operations to determine the sustainability of the water supply they share with others in terms of quality, quantity, and other issues such as infrastructure to treat and distribute water. Through this process, one of the factors Coca-Cola plants must examine is whether or not their use of water and discharge of water has the potential to negatively impact the ability of other community members to access a sufficient quantity and quality of water. If so, or if there are areas where water sources may still be unsustainable in some aspect, Coca-Cola’s requirement then mandates that each plant develop and implement a Source Water Protection Plan. The plan, among other things, engages others to mutually seek solutions to promote the sustainability of the local water source. This may result in replenish projects or other opportunities. While each plant may not replenish all water to its direct source, Coca-Cola’s policy is to require that all plants work to ensure they do not negatively impact water sources and work with the community on longer term solutions.

Coca-Cola’s replenishment strategy supports the Company’s overall water goal to safely return to communities and nature an amount of water equal to what is used in its beverages and their production. On the production side, the Coca-Cola system returned approximately 145.8 billion liters of water used in its manufacturing processes back to local watersheds near our bottling plants through treated wastewater in 2015.

“All life depends on water, but less than 1 percent of the world’s water is fresh and accessible. From mountain glaciers to estuaries, we must account for the whole system if we hope to secure freshwater for all,” said Carter Roberts, World Wildlife Fund (WWF) President and CEO. “This means partnerships matter. This is an important milestone in Coca-Cola’s continued leadership on water stewardship and sets a standard for other water users to build from.”

Four programs with significant contribution to Coca-Cola’s water replenishment activities are our global conservation partnership with WWF, The Coca-Cola Africa Foundation’s Replenish Africa Initiative (RAIN), the Company’s Every Drop Matters partnership with UNDP, which expanded to New World in 2014, and Coca-Cola’s investment in 50 water funds across 12 countries in Africa, Latin America and the Caribbean, with key partners TNC, FEMSA Foundation and the Inter-American Development Bank (IDB). All of these programs are active and committed through 2020.

Replenish projects work to balance, or offset, the direct water use of The Coca-Cola Company and its bottling partners across operations in more than 200 countries. The water use is inclusive of water used within manufacturing as well as finished beverages, which includes water from fountain sales. The water footprint of growing agricultural ingredients sourced by the Coca-Cola system is not included in this goal. However, sustainable water practices are part of Coca-Cola’s Sustainable Agriculture Guiding Principles required for suppliers.

Superstar Anushka Sharma is the Brand Ambassador for Softline Leggings

The Coca-Cola Company and its Partners in India to Contribute USD...

‘The Tempest’ at Chitkara International School