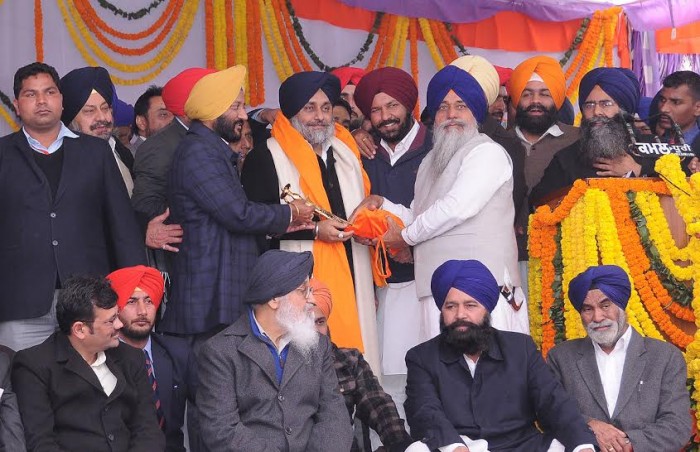 NewZNew (Sri Muktsar Sahib) : Reiterating that the SAD-BJP alliance in the state was impeccable and everlasting, the Punjab Chief Minister Mr. Parkash Singh Badal today said that Congress was ‘day dreaming’ of coming back to power in the state by spreading canards regarding fissures in them.

Addressing the gathering during the political conference on the occasion of Maghi here today, the Chief Minister, while pointing towards the leadership of both the alliance partners sharing the stage, said that the alliance was firm as it has been time and again cemented with the bonding of love and mutual affection. He said that the rumors regarding the strained relationship of the both the alliance partners was just a figment of imagination of the frustrated leadership of the Congress party, which was dying to attain power in the state. Mr. Badal said that the SAD-BJP alliance was a unique phenomenon in the Indian democratic system which has stood the test of time by passing every litmus test.

Terming communal harmony and brotherhood in the state as the biggest achievement of SAD-BJP alliance government, the Chief Minister said that the alliance government has thwarted every move of the Congress party to divide the people of religious lines. Mr. Badal further said that the alliance was need of the hour to further curb the nefarious designs of the Congress party for disturbing the hard earned peace of the state. “Everyone knows that Punjab faced the trauma of black days of Terrorism because of the political conspiracies hatched by the Congress” he added.

The Chief Minister further said that with the formation of the NDA Government at the centre the hope of resolution of long standing social, economic, political and religious issues of Punjab has revived. Mr. Badal said that the state government would soon take up these issues with Prime Minister Mr. Narendra Modi. He said that the NDA government has already sanctioned big tickets projects like the one for eradicating water logging from the state and relining of canals to the state adding that the remaining issues would also be solved by the Modi Government. “Our government at centre was committed for overall development of the country and Mr. Modi will help the state government to give further impetus to the overall development of the state” added Mr. Badal.

Quipping at the proposed rally by the Congress party on January 22, the Chief Minister said that the Congress party was trying to score brownie points in the media by resorting to such political tantrums. He dared the Congress leadership that if they were so much concerned about the sensitive issue of drugs then they should make the people aware about it by going in every village. However, Mr. Badal said that rather than solving this issue the Congress was trying get political mileage out of this matter.

The Chief Minister also announced that he would soon take up the matter of upgradation of Sri Guru Gobind Singh Marg phase II from Takht Sri Damdama Sahib (Talwandi Sabo) to Sri Hazur Sahib with the respective Chief Ministers of the states as it symbolizes the spirit of national unity, integrity and pride for which the Sikh Gurus and their followers made supreme sacrifices. Mr. Badal said that he would personally meet Chief Ministers of all Haryana, Rajasthan, Delhi, Uttar Pradesh, Madhya Pradesh and Maharashtra through which this historic road passes and urge them to expedite the work on this project.

Soliciting the whole hearted support of Government of India (GoI) for checking the flow of drugs in the state, the Chief Minister said that the need of the hour was to wage a joint war against this curse. He said that the curse of drugs was the biggest problem faced by the country in general and state in particular adding that the only solution for checking this menace was to totally cut down the supply line of drugs both from within the country and from abroad. Mr. Badal also listed the steps taken by the state government for curbing the problems of drug and cancer in the state.

Batting for less expenditure on marriages in the state, the Chief Minister said that these occasions must not be used for showing off the wealth to others by making huge expenses on them. He also called upon the entire cadre of the SAD-BJP alliance to channelize their energy for making the people aware about the menace of drugs, female foeticide, environmental pollution and others in the state. Mr. Badal said that the Lok Lehar of Shiromani Akali Dal was must for the well being of every strata of society.

Earlier in his address the Deputy Chief Minister Mr. Sukhbir Singh Badal, while announcing that 2015 would be observed as year against social maladies, asked the entire rank and file of the SAD to gear up for eradicating the social problems like Drugs, female foeticide, environmental pollution and others engulfing the state. He said that the SAD would restart the assembly wise ‘Langar Sewa’, earlier organized by his mother late Mrs. Surinder Kaur Badal, at Sri Darbar Sahib Amritsar. Likewise, Mr. Sukhbir Singh Badal also announced that SAD would also organize assembly wise Kirtan Darbars across the state as a part of its ‘social construction’ program.

Training his guns against the Congress Vice President Mr. Rahul Gandhi, the Deputy Chief Minister assailed him for branding Punjabis as drug addicts. He said that Congress has always tried to defame the hard working and resilient Punjabis by describing them as terrorists in the past and drug addicts now. Mr. Sukhbir Singh Badal said that it was shameful on the part of state Congress leaders that they do not resist such moves on part of their high command to tarnish the image Punjab and Punjabis.

Taking a jibe on the ongoing war between state Congress Chief Mr. Partap Singh Bajwa and former Chief Minister Captain Amarinder Singh, the Deputy Chief Minister said that these leaders have proved that they could not manage their house than how would manage the affairs of the state. He announced that the SAD-BJP would serve the state and its people for the next 25 years adding that till then both these ‘old guards’ of Congress would hang up their boots. “All these Congress leaders are mere puppets in the hands of Gandhi family and have hardly any concern for the state” added Mr. Badal.

In his address state BJP President Mr. Kamal Sharma while describing the state as sword arm of the country stressed on the need for having a healthy and strong Punjab as it would directly mean a ‘strong India’. Mr. Sharma hailed the historic initiatives taken by the Modi Government at the centre to ensure the overall development of the country and prosperity of its people. He also stressed on the need for synergizing the efforts of Centre and state government for the welfare of state.

Earlier, the Deputy Chief Minister Mr. Sukhbir Singh Badal was given a rousing welcome by hundreds of Youth Akali workers, led by Youth Akali Dal’s Malwa Zone President Mr. Kanwarjeet Singh Rozy Barkandi, who escorted him to the venue of conference in a cavalcade of motor bikes.

Sprite Till I Die adds a dash of creativity to Chandigarh...