newznew (New Delhi) : In what is being seen as Congress party’s initiative to forge an Opposition unity against the Centre’s demonetisation move and allegations of corruption against PM Narendra Modi, leaders of top political parties will meet here on Tuesday.

However, key “secular” players have planned to skip today’s meeting, which they see as a solely Congress vice president Rahul Gandhi’s initiative. Congress chief Sonia Gandhi is not expected to attend today’s meeting on demonetisation. 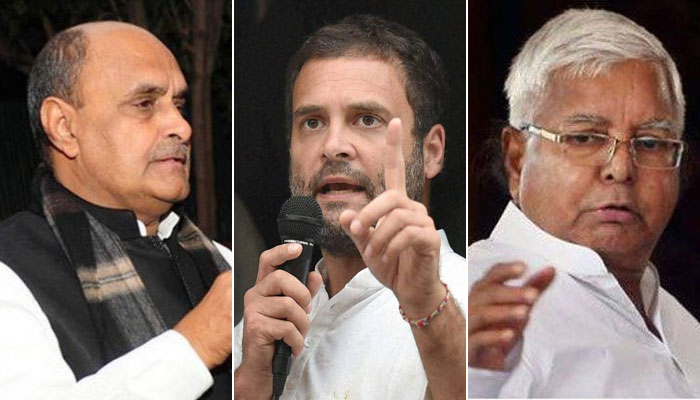 Congress leader Ghulam Nabi Azad this morning made an appeal to all opposition parties to attend today’s presser on the issue.

As per reports, several parties have decided to pull out of a joint press conference called by the Congress in the national capital over note ban today even as its vice president continues his tirade against Prime Minister Narendra Modi in an effort to garner eyeballs over the issue.

Nitish Kumar’s JD(U) and the CPI(M) have decided to stay away from the Opposition’s show of strength even though both the parties actively supported the Congress in Parliament’s Winter Session.

On the other hand, CPI(M) chief Sitaram Yechury said that his party will not participate in today’s event, news agency ANI reported.

“All 16 Opposition parties will not be there. Things are not planned properly,” he said, adding that Lalu Prasad’s RJD and Sharad Pawar’s NCP have “similar reservations”.

We were not sounded out, we don’t know what is the agenda of the press briefing, there is no common minimum programme. So how can we participate?, JD(U) leader KC Tyagi was quoted.

Meanwhile, senior NCP leader DP Tripathi said that although the “Opposition is united over the wrong implementation” of the November 8 demonetisation, his party won’t be going to the presser.”

The Samajwadi Party, too, was undecided on the issue.

“We have not decided… at least, I am not going. You may contact neta ji (Mulayam Singh Yadav) for more details,” SP leader Naresh Agrawal said.

However, West Bengal Chief Minister Mamata Banerjee had emerged as the saving grace for Congress’s meeting, which is likely to attend the joint press conference on demonetisation today.

TMC leader Sukehndu Shekhar Roy said yesterday that his party is “most likely” to participate.

Several Opposition parties were left red-faced after a Congress delegation led by Rahul went to meet PM Modi on December 16 on the issue of farm loans without even informing them.

Also, some media reports said that the growing closeness between TMC and the Congress has upset the Left.

Android 6.0 Marshmallow Update : List of Smartphone Devices To Be...

Prema to enact the role of Chintu’s mother in Sony SAB’s...