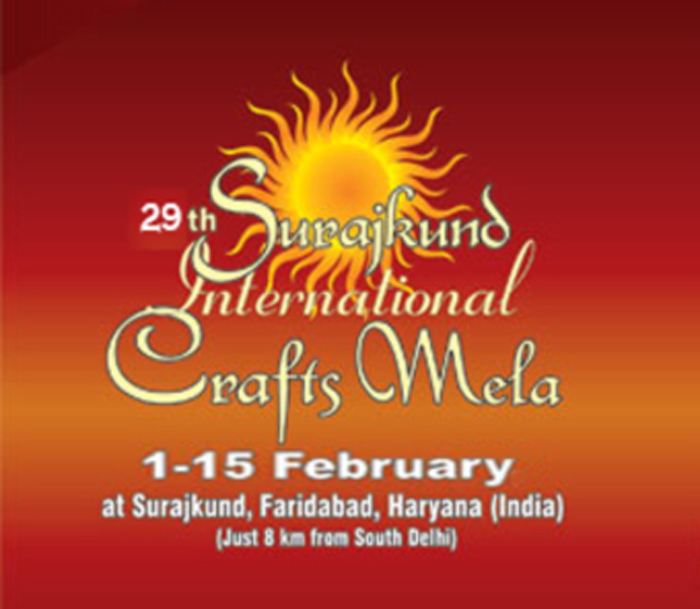 The Surajkund Crafts Mela was hosted for the first time in 1987 to showcase richness and diversity of the handicrafts, handlooms and the cultural heritage of India. Jointly hosted by the Surajkund Mela Authority and Haryana Tourism in collaboration with the Union Ministries of Tourism, Textiles, Culture, External Affairs, Department of Tourism and Government of Haryana, this festival has come to occupy a place of pride and prominence on the international tourism calendar for its display of crafts, culture & cuisine of India in aesthetically created ambience.

Mrs Sumita Misra, Chief Administrator, Surajkund Mela Authority & Managing Director, Haryana Tourism stated that besides attracting lacs of domestic and foreign visitors each year, it has also helped in reviving the heritage crafts of India. This year, many new initiatives have been undertaken like the introduction of free Mobile Application, ‘Surajkund Mela’, for smartphones and online ticketing through Book My Show and also Mela entry tickets are available at 22 Delhi Metro stations.

A benchmark was set in the history of Surajkund Crafts Mela as it was upgraded to an international level in 2013. In 2014, about 15 countries from Europe and Africa including SAARC countries participated in the Mela.

Chhattisgarh, ‘the Theme State’ of this year’s Surajkund International Crafts Mela, is showcasing its unique cultural and historical heritage in an impressive manner. The state will present its tribal heritage and culture, which is still found well-preserved in the forests of Bastar. The artistes from Chhattisgarh will put up a vibrant show with folk dances namely Panthi, Rawat Nacha Pandwani, Chaitra, Kaksar, Saila and Soowa.

Chhattisgarh has created stunning ambience with idols of Hindu deities like Ganesha and Rudra Shiva and a temple of Shiva being positioned in the Mela Ground. A magnificent gate has been erected depicting the cultural traditions and art forms of the state. Theme State’s ‘Apna Ghar’ and log huts have been done up in an artistic style. Furthermore, the Geri dancers’ and horses’ statues, which are visible from a distance, will lend charm to the Mela environs.

Lebanon, the ‘Partner Nation’ of the Mela this year, will unveil its ancient heritage of creating crafts in style. The craftspersons, cultural troupes and master chefs from the Mediterranean nation will exhibit their talent and skills to enthrall the visitors during the Mela. Lebanon will showcase to the world their identity as a nation, its history, culture, arts, cuisine, customs and traditions; and leave an everlasting memory in the hearts and minds of the people of India who come to Surajkund.

To enliven the visitors’ mood, scintillating performances will be presented by international folk artistes from Lebanon, Sri Lanka, Armenia, Azerbaijan, Russia Federation (Moscow), Belarus, Kyrgyzstan, Kazakhstan, Uzbekistan, Georgia and Tajikistan. A variety of dance forms during Day Performances will be staged by folk artistes of North Zone Cultural Centre and other Zonal Cultural Centres, like Kud of Jammu & Kashmir, Ghoomar of Haryana, Kalbelia of Rajasthan, Sidhi Dhamal and Raas Garba of Gujarat, Machhi of Daman Diu, Raas of Uttar Pradesh, Laavni of Maharashtra, Bihu of Assam, Purulia Chau of West Bengal, Lambadi of Andhra Pradesh, to name a few, at the open-air theatre, ‘Chaupal’, within the Mela ground.

The Mela ground is spread over 40 acres of land and houses about 766 work huts for craftspersons and a multi-cuisine food court, which is immensely popular with visitors. This year, visitors can relish mouth-watering cuisines including the robust flavours from Punjab and sumptuous Mughlai, subtle aromas of the South and oriental flavours of Chinese along with Indian street food and other state specialities at the Food Court. Also, state-owned Institutes of Hotel Management of Faridabad, Kurukshetra and Panipat would dish out various ethnic delicacies.

A family each from states of Haryana and Chhattisgarh are going to live in specially created ‘Apna Ghar’ to showcase the typical lifestyle of the area and their households. A new ‘Apna Ghar’ of Haryana has been created with a big-size courtyard that has a hand pump, Madhani, Gandassa, Chulha, Charkha, Charpoy, Mudas, Hookas and utensils etc. The entrance to Apna Ghar has been changed with an access from the main road.

Similarly, the Food Court is decorated with a giant rainbow and a big size sunflower at the entrance, assorted buntings of different shapes and shades, 3-D fabric fruits & leaves. Food kiosks and permanent food vending points selling packed and ready-to-eat items have been set up in an artistic manner. The Food Court ‘Haveli’ in the Mela premises also has been given a new look.

Surajkund derives its name from the ancient amphitheatre Sunpool constructed here in the 10th century AD by Raja Suraj Pal, one of the Tomar chieftains. This is a unique monument as it was built to worship “Surya” the Sun God and it resembles a Greek amphitheatre.  During the reign of Feroze Shah Tughlaq (1351-88), this reservoir was refurbished by rebuilding its steps and terraces with stones in lime mortar. The Mela is indeed a tribute to the richness and diversity of the cultural heritage of India in the backdrop of this magnificent monument. To highlight the splendid heritage of the ancient Sunpool, Archaeological Survey of India will keep the entry to the monument open for visitors during the Mela timings from 10:00 am to
5:30 pm. Also the entry tickets of the monument will be available from Surajkund Mela ticket booths for the convenience of the visitors.

How to reach Surajkund?

Metro services are also available from Central Secretariat till Badarpur via Sarita Vihar and Mohan Estate. Badarpur locality is close to the interstate border between the city of Faridabad and Delhi.

BACKGROUND NOTE OF THE 29TH SURAJKUND INTERNATIONAL CRAFTS MELA TO BE HELD FROM 1-15 FEBRUARY, 2015 AT SURAJKUND, FARIDABAD.

o   The Surajkund Crafts Mela was hosted for the first time in 1987 to showcase the richness and diversity of the handicrafts, handlooms and the cultural heritage of India.

o   Jointly hosted by the Surajkund Crafts Mela Authority and Haryana Tourism Corporation in collaboration with the Union Ministries of Tourism, Textiles, Culture, External Affairs, Department of Tourism and Government of Haryana, it has come to occupy a place of pride and prominence on the international tourism calendar attracting more than a million domestic and foreign visitors during the Mela fortnight.

o   The Surajkund International Crafts Mela is unique, as it affords an excellent opportunity to the finest craftspersons and weavers of India to display and sell their products directly without being exploited by middlemen.  The popularity of the Mela enables them to bag orders of their products from buyers for many years in advance.

o   Keeping in view the overwhelming response from SAARC and other nations, it was decided to upgrade the Mela to an International Crafts Mela w.e.f. 2013. In 2014, 15 countries from Europe and Africa including SAARC countries took part in the Mela.

o   Lebanon has been chosen as the Partner Nation of this year’s
Surajkund International Crafts Mela. A contingent of craftspersons from Lebanon will showcase best of handlooms and handicrafts of their country in a unique ambience that would transfer you to the Mediterranean nation. The cultural troupes from Lebanon would present enthralling performances and their master chefs will rustle up an array of authentic and mouth-watering delicacies in the Food Court.

o   Other than the engrossing Day Performances at the Open Air ‘Chaupal’ within the Mela ground, there will be scintillating evening cultural programmes at the Chaupal with popular artistes, poets and cultural troupes performing from 6.00 pm onwards during the Mela fortnight.

o   A multi-cuisine Food Court is set-up that serves mouth-watering cuisines including the robust flavours from Punjab and sumptuous Mughlai, subtle aromas of the South and oriental flavours of Chinese along with Indian street food and other state specialities.

o   On 5th February, National Day of Lebanon will be celebrated at the Mela grounds and performances of a Lebanese youth band and dancing troupe depicting the nation’s identity, heritage and culture will mark the occasion.

o   On 7th February, Chhattisgarh will present a Fashion Show, which will showcase the splendour of the state’s handlooms and weaving styles.

o   The Mela ground spread over 40 acres of land houses about 766 work huts for craftspersons and a multi-cuisine Food Court, which is extremely popular with visitors.

o   Keeping pace with Information Technology (IT) advancements, a mobile application under the name ‘Surajkund Mela’ has been launched for the public, which can be downloaded for free on smartphones iOS (Apple) and Android operating systems and one can get every kind of information about the Fair, Events Schedule, Artiste/Craftsperson/Performer’s Profile (details including Category, Title, Thumbnail, Description, etc.), Location Map, E-Ticketing, Media coverage of the fair, Photo Gallery, Video Gallery, Information Screen, Contact Us.

o    In sync with new technology, this year for the first time the Mela entry tickets will be available on Book My Show.

o    The Mela entry tickets can be bought online on www.haryanatourism.gov.in and through Mobile Application android operating systems under the name Surajkund Mela; an SMS sent will be valid for e-ticket.

o    In another new initiative, for the first time the Mela entry tickets will be available at
22 Delhi Metro stations situated at strategic locations.

o    A 50 % rebate will be provided to differently-abled, senior citizens and serving defence personnel on the Mela entry tickets available online and off-line in addition to the sale of tickets manually through entry gates.

o    To encourage youth participation in the Mela, college students will get 50% discount on Mela entry tickets on producing valid photo I-cards during weekdays.

o    The payment of Mela entry tickets can be done through payment gateway of HDFC, ICICI and Axis Banks i.e. Debit/Credit Card – Master/Visa/Maestro and through Net Banking extended by 25 banks.

o    Furthermore, a new ticket booth has been constructed near Kerala gate (Gate no.2).

o    Among many other firsts, the craftspersons skill/craft will be promoted on online portals snapdeal.com and flipkart.com

o    About 80 new Work Huts have been created to accommodate more craftspersons to the Mela. All work huts will be embellished with fabric buntings and some other features.

o    For the comfort of the artistes, new green rooms, separate restrooms and waiting lounge adjoining the Chaupal have also been created. The façade of the Chaupal has also been given an attractive makeover and also an impressive entrance gateway has been built.

o    A complete ban has been imposed on the plastics/polythene within the Mela premises. Adequate arrangements have been made for the sale of non-woven bags at affordable rates for the visitors as well as craftspersons.

o    Elaborate security arrangements have been made by installing CCTV Cameras in the Mela ground along with the Night Vision Cameras.  A large number of security personnel have been deployed within the Mela premises, so as to prevent the occurrence of any untoward incident or mishap.

o    Ample parking area for vehicles is available to ensure smooth and unhindered flow of traffic.

o    Golf Carts and a Battery Operated Rickshaws are available on request for facilitating the movement of senior citizens and differently-abled persons.

o    RO system kiosks have been installed to provide pure and safe drinking water to the visitors.

o    Extra public conveniences have been created for women.