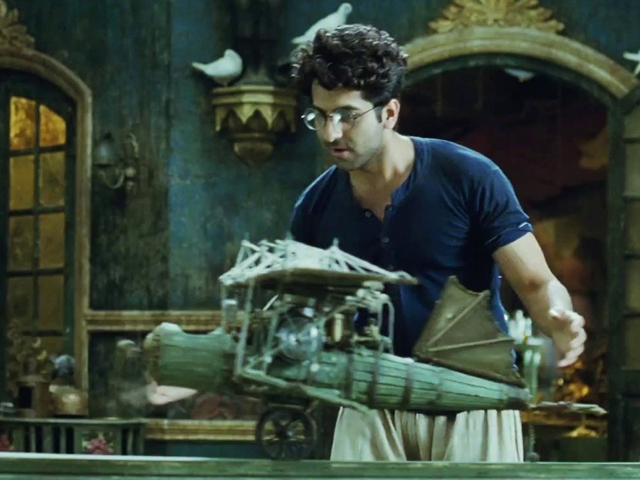 NewZNew (Movie Review) : A well-intentioned but stodgy cinematic fleshing out of an obscure footnote in aviation history, Hawaizaada takes eons to climb to cruising altitude. When it does get there with excessive load weighing it down, it is pretty much on a wing and a prayer.

But that is not to say that writer-director Vibhu Virender Puri’s debut film has no wind in its sails. He brings an impressive degree of visual panache to his treatment of the story of maverick 19th century Mumbai inventor Shivkar Talpade.

Sadly, he does not back up the surface gloss with the kind of dramatic traction and logic that can hold a two-and-a-half-hour-long film together.

Shivkar Bapuji Talpade, projected here as a defiant goofball who thinks nothing of going where no Indian has ever gone before, is believed to have designed and flown an aircraft eight years before the Wright brothers got their contraption airborne in North Carolina in 1903.

Talpade’s apocryphal feat, presented inevitably in a highly fictionalised, even falsified, form given that little documentation is available on the 1895 event, is held up by the screenplay (co-written by Saurabh R Bhave) both as a demonstration of the sophistication of Vedic knowledge and as an emblem of the freedom struggle.

As if to emphasise that the overheated narrative is essentially meant to be a flight of fancy, the director imparts a musical fairy tale feel to his storytelling style.

The actors keep pace with the overall theatrical tone of the film by resorting to performances that are overly physical.

Unfortunately, despite its many innate strengths, Hawaizaada overreaches and fails to attain stability.

The film alternates between the tedious and the excessively outlandish as it negotiates its way through a terrain that is riddled with psychological craters and historical inaccuracies.

The protagonist of Hawaizaada Shivi (Ayushman Khurana) is a young academic laggard who repeatedly falls foul of his conservative father (Jayant Kripalani) because he is unable to make a success of anything that he attempts in life.

Shivi has a secret passion for science and there are only two people who have any faith in him – his young nephew Narayan (Naman Jain) who hero-worships him and an aged Vedic scholar Shastry (Mithun Chakraborty) who takes him under his wings.

On a ship that doubles up as the old aviation freak’s abode, the three chip away in isolation to get their dream off the ground.

It is difficult fathom why the British are so suspicious of the work of the homegrown inventors. In one corny scene, a white officer says the Empire cannot countenance “a land of poor, uneducated tribals” producing an aircraft.

That, the man goes on to argue, will shatter the “snake charmers and rope trick” image that has been assiduously cultivated for India. That line does not work even if it is meant to be no more than facetious.

The love story tagged to Hawaizaada also does not do much good. It slows down the pace and takes the focus away from the real crux of the story.

Shivi falls in love with a tamasha dancer Sitara (Pallavi Sharda), who gives him a reason to keep slogging away even when the wind does refuses to blow in his favour.

Hawaizaada has a lush texture and the manner in which director of photography Savita Singh uses light, shade and visual depth is outstanding.

Much as Hawaizaada is the cinematographer’s film, it also gives the production designers much scope to push the boundaries.

The sets on which Hawaizaada has been filmed is loaded with interesting elements. It is when the camera pans across the 19th century Mumbai skyline that the film does not look quite as impressive.

With a little more restraint, the production design would have added value to the narrative instead of overshadowing it.

Ayushman Khurana carries Hawaizaada on his shoulders with élan. Pallavi Sharda, notwithstanding her sketchily etched character, does enough to live down the Besharam fiasco.

Naman Jain, in the role of the hero’s nephew, is a consummate scene-stealer. How one wishes the film had more scenes worth stealing.

Think out of the box this Father’s Day, with Jimmy’s Cocktails