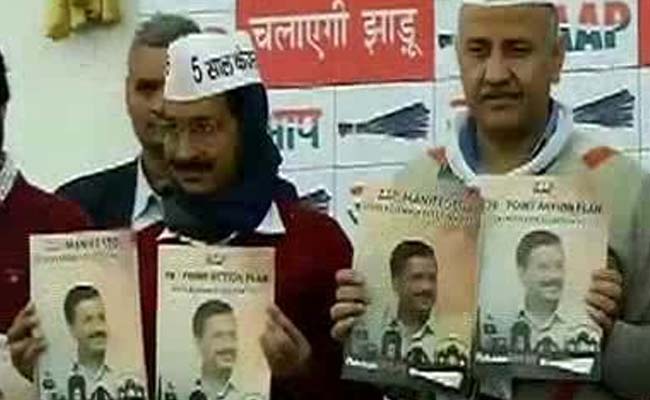 The manifesto also promised to open 20 new colleges, a 50 per cent reduction in power tariff, clean drinking water at affordable prices and a free Wi-Fi zone, among others.

Releasing the manifesto, party chief Arvind Kejriwal said that it was a sacred document for them akin to “the Geeta, Bible, Quran, and the Guru Granth Sahib”.

He said that party would implement all the promises made in their manifesto as they had done in their earlier rule of 49 days.

Taking a dig at BJP for not coming out with a manifesto, Mr Kejriwal said that the BJP was shying away from making any promises as they had not fulfilled those which they made at the time of the Lok Sabha election.

“What to say about fulfilling promises, they (BJP) have not taken any steps in that direction,” the AAP leader said.

The Bharatiya Janata Party (BJP) had announced that it will not release a manifesto for Delhi polls and would instead come up with a ‘vision document’.

With regard to the Congress, Mr Kejriwal said that in their rule of 15 years they released three manifestos in which they had made tall claims, but sadly most of their promises have not realised.

Delhi will vote for new government on February 7. Counting of votes will take place on February 10.

Zee Punjabi is all set to launch a romantic drama show...